The truth about fats

This article was originally published in October 2010 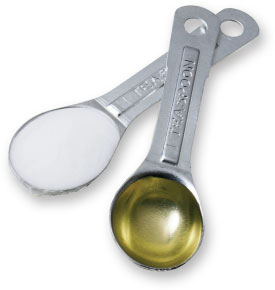 The surprising benefits of saturated fats

We’ve survived the era of low-fat diets and learned about the health problems they create, but the media still attempts to guide our thinking that fats can make us fat and cholesterol causes heart disease.

The truth is that fats play an important role in our body’s health and some of them can even help us lose weight. Unfortunately, we consume too few of the healthy fats, and too many of the unhealthy, man-made versions.

The roles fats play in our health are extensive. For example, fat provides energy; it’s difficult to eat enough food on a low-fat diet to get the energy we need. Essential fatty acids are brain food — a deficiency can lead to numerous health and psychiatric/social problems. Fats are needed to absorb fat-soluble vitamins such as A, D, E and K. Fats give us a feeling of satiety, preventing hunger soon after meals.

Saturated fats were the preferred choice until the mid-20th century. Then, all of a sudden, we were told to cut saturated fats from our diet if we wanted to maintain healthy weight, have good cholesterol, and prevent heart disease. Marketers of low-fat foods championed the cause and few people questioned why foods eaten for centuries suddenly were causing heart disease.

It’s interesting that at the turn of the last century, saturated fats such as coconut oil were advertised as healthy. Saturated fats even were recommended for treating serious medical conditions, such as tuberculosis and epilepsy.

While medical experts claimed “fats are good” prior to World War II, we heard just the opposite in the years that followed, once the vegetable and seed oil industry stepped up production because tropical oils couldn’t be shipped during World War II.

But drastically reducing fats from the modern diet has not solved our heart health or weight problems. Statistics show that obesity rates are at an all-time high as is heart disease, cancer, diabetes and stroke.

A study published in 2006 in the “Journal of the American Medical Association” found virtually identical rates of heart attack, stroke and other cardiovascular disease in women who did or didn’t follow a low-fat diet. Women on the low-fat diet also didn’t lose — or gain — any more weight than women who followed their usual diets. The doctrine of low-fat eating has lost credibility.

The anti-saturated fat theory began in the 1950s with the steep rise in heart disease. While heart disease caused no more than 10 percent of all deaths in the United States prior to the 1920s, by the 1950s it had risen to more than 30 percent. Researchers began looking for the cause of this new health threat and targeted cholesterol as the culprit.

Many researchers, however, have rejected the saturated fat and cholesterol theory as a cause of heart disease because more than 60 percent of all heart attacks occur in people with normal cholesterol levels and the majority of people with high cholesterol levels never have heart attacks. A study published in August 2010 in the “American Journal of Clinical Nutrition” found that if saturated fat in the diet is too low, it can lead to an increased risk of death from stroke.

Another fat, however, is being implicated in poor health. A study conducted at the Wynn Institute for Metabolic Research in London examined the composition of human aortic plaques. It found that the artery-clogging fats in those who died from heart disease were composed of 26 percent saturated fat and 74 percent polyunsaturated fatty acids.

The researchers determined no association with saturated fats but rather implicated polyunsaturates, such as those found in vegetable oils, as the primary contributors to aortic plaque formation and suggested that people avoid these oils completely.

The American Heart Association has discovered that people with heart disease all have one thing in common — inflammation. High cholesterol levels are not even on the list.

Researchers currently are focusing on damaged fats (particularly trans fats found in margarine, snack foods and fried foods), the use of oils high in omega-6 fatty acids (polyunsaturates), inflammation, blood clots, high blood pressure, high levels of homocysteine (an amino acid in the blood), and high levels of Lp(a), a protein produced in the liver. When Lp(a) encounters an LDL cholesterol particle (“bad” cholesterol”), it binds to it and confers a much more aggressive behavior to the LDL particle.

It may be surprising that saturated fats now are considered the healthiest fats for cooking precisely because they are saturated. There are no double bonds between the carbon atoms; they’re fully saturated with hydrogen atoms. This structure means that bonds will not break easily when heated and saturated with oxygen.

By contrast, unsaturated fats, such as olive and canola oil (monounsaturated fats) and safflower, sunflower, soy, and corn oil (polyunsaturates) have carbon bonds that are not saturated. Their double bonds can become saturated with oxygen from the environment. When this happens, the oils have oxidized and become rancid and unsuitable for consumption. This happens easily with these oils and can occur even in their processing.

The healthiest fats and oils

Oils and fats to limit/avoid

Cherie Calbom, M.S., has a master’s degree in nutrition from Bastyr University, where she now serves on the Board of Regents. She is the author of 17 books on nutrition, including “The Coconut Diet” and “The Juice Lady’s Turbo Diet.” For more information, see cheriecalbom.com.

Notes from the Cellar: Autumn, amen

PCC partners with the Non-GMO Project

We know how passionate you are about avoiding genetically modified organisms (GMOs) in your food. It’s why PCC is supporting the Non-GMO Project. You’ll begin to notice signs in our stores identifying products as “Non-GMO Project Enrolled” or “Non-GMO Project Verified.”