Protein — how much is enough … or too much?

This article was originally published in May 2010 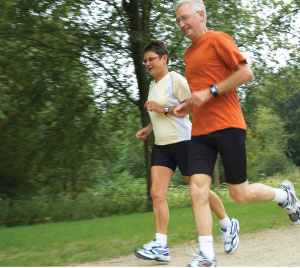 Determining your need for protein

Given what we know — that our ancestors ate relatively high-protein diets and that these diets are shown to help with obesity, diabetes and other modern health concerns — I recommend that my patients embark on a little experiment to determine their ideal protein intake.

(May 2010) — “Am I eating enough protein?” is a question I’m not asked often enough. I’ve seen hundreds of diabetic, fatigued, obese and vegetarian patients who do not know their protein intake and should. Their health depends on it.

It’s important to understand first that protein is not stored in the body like fat. It must be replenished each day. Protein starvation causes the body to scavenge, breaking down muscle and other body proteins.

The standard, nutrition-textbook answer to the “Am I eating enough protein?” question is 1/4 to 1/2 gram per pound of body weight. By this guideline, a 150-pound person would require 38 to 75 grams. Other authors and the government’s Recommended Dietary Allowance (RDA) split the difference and recommend 0.36 grams of protein per pound, meaning a 150-pound person would require 54 grams.

Placing beans in the protein category acknowledges them as a legitimate protein source and encourages more people to eat them. Separating dairy into its own category leaves the impression that dairy foods are somehow special and necessary, while the truth is many cultures enjoy excellent health without the inclusion of dairy in their diets.

The pyramid suggests five 1-ounce “equivalent” portions in the meat and bean category per day. An “equivalent” portion, according to the pyramid, is 1 ounce of meat, poultry or fish, 1/4 cup cooked beans, one egg, 1 tablespoon of peanut butter, or 1/2 ounce of nuts or seeds. If you translate their protein content into numbers, you see they’re only roughly “equivalent.”

For instance, an ounce of beef tenderloin contains 8 grams of protein, while 1/2 ounce of almonds contains 3.5 grams, an ounce of cod 6.6 grams, and 1/4 cup cooked black beans 3.8 grams. Egg protein varies with the size of the egg, from about 4 to 8 grams.

At the suggested meat and bean portions, many people would be required also to eat a dairy portion to boost their protein intake to the 0.36 gram per pound level. The pyramid suggests three 1-cup equivalents of dairy per day. One cup of milk equals 1 cup of yogurt equals 1 1/2 ounces of cheese, and each have about 8 grams of protein.

There are a few problems with following the pyramid’s guidelines. For one, someone eating meat protein would be consuming significantly more than a person eating only nuts and beans. Also, the pyramid doesn’t recognize grains as a protein source even though some, including quinoa and millet, contain more protein than many beans.

The pyramid also doesn’t factor in a person’s weight. Its suggestions only meet the requirements for a person of average height and of ideal weight. I recommend my patients instead calculate ideal protein intake based on their weight.

The last 15 years has seen an increased popularity of high-protein diets, such as the Atkins Diet and the South Beach Diet. Critics of Atkins point to the amount of saturated fat that comes with this level of protein. They believe it is unhealthy for the heart. Excessive protein also places a burden on the kidneys and has been shown to drain calcium from the bones.

Meal timing
It’s better to distribute protein throughout the day, weighing slightly in favor of breakfast.

A 2007 study in the Journal of the American Medical Association (JAMA), however, compared various weight-loss diets and absolved the Atkins diet from any harmful effects. Atkins actually rated better than the commonly prescribed low-fat diet, the Zone Diet and the South Beach Diet. (I would emphasize that the differences in these diets were small and the study only lasted one year.)

The relatively low-protein, high-carbohydrate diet that became popular in the 1950s still is the most commonly advocated diet, in spite of increasing evidence from top researchers that this diet was a mistaken strategy. Many researchers now think the low-fat, high-carb diet has contributed to the increasing rates of obesity, diabetes and heart disease seen in the past few decades.

My experience has been that blood glucose-sensitive people and those wishing to lose weight often do better by raising their protein levels. If they maintain this for a few months, along with other healthy lifestyle changes, they often can go back to a more moderate protein intake.

Animal versus plant protein
There are a few problems with following the food pyramid guidelines. For one, someone eating meat protein would be consuming significantly more than a person eating only nuts and beans.

In thinking about how our early ancestors ate, remember that they were not eating much in the way of grains. There was no structured agriculture. Their carbohydrates came from roots, nuts, fruits and vegetables.

Some anthropologists believe that hunter-gatherers consumed high amounts — 45 to 65 percent of calories — from animal foods. There are researchers who believe that only 14 percent of our ancestors derived more than half their calories from plant foods.

Obviously there were climate and seasonal variations. Natives of the north ate a very high-protein and high-fat diet and were healthy and not overweight. Equatorial peoples ate more carbohydrates. One estimation for the “average” hunter-gatherer from societies worldwide is that proteins comprised 19 to 35 percent of their total calories, and carbohydrates 22 to 40 percent. These numbers are higher than the RDA and lower than Atkins. They are more in line with the Zone and South Beach Diets.

Should we be eating the same amount of protein as the “average” hunter-gatherer? It’s not an easy question to answer. See the chart below for guidance on how to determine your individual need for protein.

Meal timing (and especially protein timing) is another factor in determining the ideal amount of protein to eat. It’s not uncommon to find people who are eating the “right” amount of protein but 75 percent is eaten with dinner and none with breakfast.

It’s better to distribute protein throughout the day, weighing slightly in favor of breakfast. So, if your goal is 70 grams per day, start your day with 25, then 20 at lunch and 15 at dinner, with the other 10 split between snacks. This often levels out sugar, insulin and hormone swings.

Determine your protein intake
Periodically calculate your intake based on your health and weight by writing down everything you eat for a week.

These calculations are based on averages and may not apply to you. There are many differences in how efficient individuals are at digesting, absorbing and utilizing proteins.

If you’re considering becoming vegetarian, do so gradually. First, improve your current diet. Choose organic, increase your vegetable intake, and cut out processed foods. See a wholistic practitioner for a health exam to address any health problems. An excellent resource on vegetarianism is www.beyondvegetarianism.com.

Protein all the way

Protein is your friend and should be treated like one. Find out how much you’re currently eating and compare that to your weight, body fat and how you feel. Periodically calculate your intake based on your health and weight. Learn to prepare and enjoy non-animal sources of protein.

Tom Ballard, R.N., N.D., is a naturopathic physician practicing in Seattle and Renton, and the author of “Nutrition-1-2-3: Three Proven Diet Wisdoms for Losing Weight, Gaining Energy, and Reversing Chronic Disease.” He can be reached at PureWellnessCenters.com or TomBallardND@gmail.com.

During my term on the NOSB as a consumer representative from 2002 to 2006, I learned a lot — mostly that a peek behind the curtain at Oz isn’t necessarily what one imagines or hopes for! Congress had vested the NOSB with considerably more authority and a more extensive workload than is typical for other unpaid citizen boards.This appeared to rankle certain USDA career staff during my time there.

Long ago, a kind neighbor gave me her family’s Health Journal published in 1909. I’ve often enjoyed reading through it and trying the recipes, amazed at how milk, salt, yogurt, honey, eggs, olive oil and other kitchen staples can be used for simple, homemade body and hair care treatments.