Salt of the earth and sea

This article was originally published in January 2010 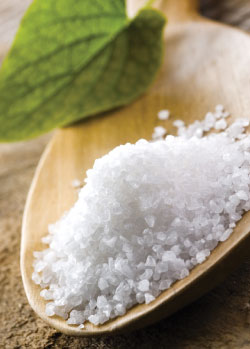 Try salts from around the world at a fun, informal tasting.

(January 2010) — If you think of salt as just the white, granular combination of two simple elements — sodium and chloride — you’re mistaken! Salts from around the world are unique in color and flavor and texture.

There are pink salts, black salts, smoked salts and flaked salts. They vary by origin, use and harvesting method. Some are used to season food, some are used for deicing icy streets, others are used to exfoliate your skin in a warm bath. Some come from the sea but most are mined and come from large deposits left by dried salt lakes throughout the world. About 5 percent of the salt harvested is used for human consumption.

A look at the selection at PCC hints of the diversity and versatility of this briny substance. It includes sea salts from France and New Zealand, hand-harvested fleur du sel, and kosher salt, to name a few.

Salt arguably has shaped the world with its religious, economic, social and environmental significance. As the earliest preservative for food, salt guaranteed provisions for early civilizations and armies on the move. It played a part in the establishment of trade routes, set off wars and revolutions, and functioned as currency.

Gandhi started his march for India’s independence as a protest against British laws about salt and, in Texas, the oil industry got its start accidentally when oil began spouting during drilling for salt!

Historically, it’s been important medicinally as well. Salt once was used as an antimicrobial and was indispensable for disinfecting wounds. It absorbs moisture and prevents bacterial growth and even can kill bacteria directly.

We still use it today for its healing properties — salty water can be gargled to cure a sore throat, or in a neti pot to clear sinuses. Salt lamps (chunks of mined salt that are hollowed out to allow room for a light bulb or candle) are considered health-promoting because they emit negative ions, thought to purify the air. Added to food, salt can unwind proteins in foods, an enzymatic process similar to cooking that helps us digest food.

Our blood has the same chemical balance of sodium, potassium and calcium as the oceans. The ratio of sodium with other minerals is important; one study found this balance more significant than the level of sodium intake.

Salt is necessary for good health but poses risks in excess. Eating too much salt is linked to high blood pressure, heart attacks and stroke. It’s recommended that people eat no more than a teaspoon per day (2,300 milligrams) although most consume much more — usually in processed foods, such as crackers, chips, canned or frozen foods, and meat and cheese products.

About 80 percent of sodium intake comes from packaged foods. Only 11 percent is from what people add in the kitchen or at the table. 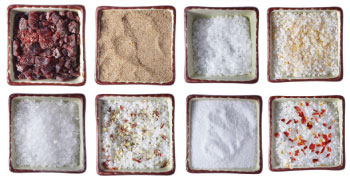 If you think of salt as just the white, granular combination of two simple elements — sodium and chloride — you’re mistaken! Salts from around the world are unique in color and flavor and texture.

Not all salts used for seasoning food are equal. Like other foods, salt can be more or less refined, and less refined salts have more minerals. Refined salts are uniform and white compared to the rougher granules in the pink, red and gray artisan salts that may contain trace minerals.

Consumers should read all food labels and salt is no exception. Is the first ingredient an anti-caking agent (since salt attracts moisture)? Look for information on the extraction method: Is it mined and does that impact environmental or cultural preservation? Is it evaporated naturally by wind and sun, or mechanically with high heat? Where is it from?

Each salt, depending on its source and method of processing, has a unique profile of minerals and flavors. Salts that are sus-tainably harvested and free of chemicals and additives can be delicious and wholesome.

Next to water, salt may be the most basic ingredient. From pink-hued salts from the Himalayan foothills, to strong salts hand-raked in the Celtic sea, they’re anything but bland.

Many Americans assume genetically engineered (GE) crops reduce pesticide use, and they did, in the beginning at least — the first three years when GE corn, soybeans and cotton were planted. But since then, the opposite is true.

With heightened awareness of issues such as farmland loss, food security, climate change and sustainability, the trust’s work continues to grow — as does the staff. Introducing Hillary Roberts and Lynne Jordan, newest staff working with the PCC Farmland Trust.