This article was originally published in September 2009

Integrity: 1) steadfast adherence to a strict moral or ethical code, 2) the state of being wholesome, 3) the quality or condition of being complete. – Wiktionary
Photos copyright © by Micaela Colley for Organic Valley

(September 2009) — We are in the midst of a revolutionary food epoch unlike any other in history. It’s rich with potential, creativity and passion. And it’s rife with conflict, despair and danger.

To many it appears to be a mythic war between Agribusiness Goliaths and Homegrown Davids, or the systems of genetic engineering (GE) and that of organic.

Because the GE sector views seed as a vehicle to deliver its technologies (primarily pesticides and herbicide resistance), the major battles in this war will be fought around who controls plant genetics — the seed — and what technologies are used to develop them.

I respect those who don’t like war analogies but I have sat at the table with the Monsanto executives of the world and we dangerously delude ourselves in thinking they can be convinced of our concerns through anything other than grassroots fights, litigious assaults, and peace treaties negotiated from a place of power.

Unfortunately, as in all wars, there are costs to both sides and the organic movement will not leave this scenario without scars.

To be clear, I’m firmly committed to organic standards. The organic standards and label have boosted the success of thousands of family farms, brought confidence to consumers, and provided an opportunity to re-envision our food systems from seed to shelf.

It’s one of the greatest successes in the history of agriculture, for people and the planet. They’re far more demanding and superior to non-organic food standards, and are the only “sustainability” standard with statutory muscle.

It’s important that consumers do not fall into thinking organic doesn’t matter. It does, a great deal. My argument is that we must protect the value and values of organic integrity.

For most consumers there is a clear line between organic and GE. There also is an assumption that when you are eating one, you are not eating the other. It is an assumption based on well-founded desires.

The concept of organic integrity is tied closely to ideas about “naturalness.” But naturalness is a vague and broad concept, not a legally defined marketing or production claim. In consumer interviews, organic often is viewed as the codification of naturalness in food production, and naturalness is described as the absence of negative (“unnatural”) characteristics such as GE, synthetic pesticides, and animals that are factory farmed, drugged and abused.

Indeed, the U.S. Department of Agriculture’s (USDA) organic production and handling standards are process based standards that prohibit many of the substances and practices associated by consumers as “unnatural.”

The standards declare genetic engineering an “excluded method” of production. But because certification is process-based, routine testing for the presence of GE traits is not required — even for seed.

So, while knowingly planting GE seed is an excluded method that would cause the loss of organic certification, planting organic seed contaminated with GE traits does happen, and when it does it spreads the contamination at the crop production level. The sobering reality is that we must confront seed contamination to maintain organic food integrity.

It’s already incredibly challenging to source 99.99 percent pure seed (as perfect a test result as you can get, considering limitations of the tests) — especially for corn, soybeans and canola. 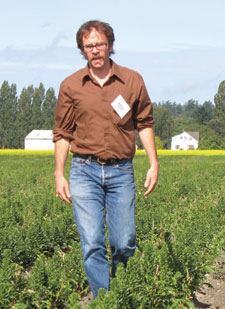 The power of organic today

You might ask what the organic industry is doing about this. Since organic standards exclude GE, why don’t seed companies routinely test, report the contamination, and screen it out rather than sell contaminated seed to organic farmers? What levels of contamination are in my foods? I can’t find out? Why not?

The truth is that much has been done, including campaigns to label GE products, litigation to block GE seeds from being allowed on the open market, development of improved genetic testing to identify trace amounts of contamination, and systems of verifying that companies are doing their best to avoid contaminated seed, crops or ingredients.

The truth also is that the overall policy in the organic industry, from seed production to finished product, has defaulted too often and too easily into “Don’t ask, don’t tell.” This default comes from the fear that we don’t have the political voice to stop or even limit contamination. Indeed, when the USDA organic standards were implemented in 2002, we may not have had the power. But seven years later, organics is a $27 billion sector and if we clear our throats in unison, we may just find a voice.

Is it any wonder, given the scenario of organic products increasing in contamination from GE crops (an invasion), that it feels like war? There are those in the Obama administration, including the current Secretary of Agriculture, calling for détente in the struggle. They use the word “coexistence” to describe a theoretical scenario in which both GE and organic systems thrive.

USDA recently published proposed regulations for deregulation of GE crops. In it they called for non-GE systems to accept a “low level presence” (LLP) of GE traits in their crops but placed no limit on what those would be. The proposed rules do not set a maximum for LLP, so organic farmers would continue to have no recourse when their crops are highly contaminated by drift from a neighbor’s field, or if they unknowingly plant seed with GE traits.

These are not the type of terms that incline organic advocates to negotiate a peace treaty. In fact, in June hundreds of organizations signed on to a letter demanding that USDA drop the LLP language from the new rules (along with asking for many other changes).

So what’s the solution? Can we have coexistence that includes protection for the underlying values of organic integrity? Or does coexistence with GE crops necessitate a shift in our collective understanding of organic integrity? Will we be forced to accept a system in which organic farmers plant “organic” seed that has increasing rates of contamination from GE crops?

As in any war, there never is a side that emerges unscathed. I do not believe organic will be able to return to being absolutely free of GE traits anytime soon. The first battles over the major commodity crops are lost and we are not going to see retroactive regulations that ban the planting of already approved GE crops, at least not in the foreseeable future.

However, DDT was created (in 1874), approved, and then banned (in 1972), so we should not give up the overall war because we lost these initial battles.

We need an interim solution to limit the gene flow or we will have a nightmare of a time trying to clean up the contamination (like with DDT) when GE finally is banned — which so many of us are committed to achieving. Because GE crops exist, and because the nature of seed/pollen/genes is to migrate and mix, we will continue to see GE contaminate organic. But we can set and maintain hard limits to the detectable amount of contamination and create accountability and liability when the low level limits are exceeded.

I suggest the creation of a system of accountability. When GE crops are deregulated by the USDA, the patent-holders of the GE traits should pay a fee into an Accountability Fund. The fees that would capitalize the fund would be based on a percentage of gross sales of the GE trait in the seed marketplace, and likely would be a fraction of a percentage given the billions of dollars in annual sales of biotech traits in seed.

The Fund would be used to pay for testing GE presence in at-risk, non-GE seed and field crops. Any contamination above the negotiated level of LLP (a limit that would not be allowed to increase under any circumstances) would be eligible for compensation based on the difference between the non-GE premium the crop would have garnered (in markets such as organic) and the price on the conventional-biotech market.

This is not a scenario I would have suggested a year ago, as I always have maintained that although organic standards are not test-based, our organic food should be free of all GE traits — or not certified organic at all. I now believe that stance will lead to an unwinnable war.

I believe that stance has led the organic food and advocacy sector to bite our nails as we wonder when “Don’t ask, don’t tell” turns into a 60 Minutes exposé on rampant GE contamination in organic food. We are not there yet but inaction will put us there. This is why PCC is participating in the Non-GMO Project (see nongmoproject.org).

We still must work to ban the technology but in the meantime we have to set limits, as unpalatable as that is. It’s time for consumer groups, retailers, organic processors, and organic farmers to unify their voice and sit down to negotiate terms. Without them, the casualties of contamination only will escalate.

Meanwhile, it’s essential to choose certified organic. It’s the highest food standard ever, and it’s unimaginable not to guard and maintain it as the safe harbor it’s intended to be.

Board report, Talk to the board, Next board meeting, and more

When we at the PCC Farmland Trust talk with donors and community members, we find many people have a very good sense of why it’s so important to save local organic farmland. On the other hand, understanding how the trust actually goes about saving land sometimes remains a little vague.

The organic dairy business: the land of milk and money

You may have read that the dairy world is imploding, that the price non-organic farmers get for their milk has fallen 50 percent since last December — the fastest, deepest drop since the Great Depression. As many as half the nation’s dairy producers — 20,000 — may call it quits by the end of 2009.