This article was originally published in June 2009 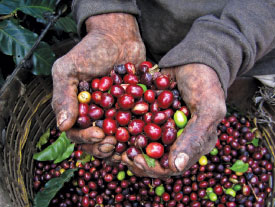 GM coffee would hurt small farmers who rely on growing and picking coffee for their income.

(June 2009) — Our morning coffee is brewed from beans grown by 25 million producers in the tropics, primarily in hand-tended backyard plots. On the island of Oahu, Hawaii, biotechnologists from Integrated Coffee Technology Inc. (ICTI). want to change all that.

Good coffee depends on quality coffee cherries picked when the fruit is red and shiny — neither green nor overripe. Coffee fruit doesn’t ripen simultaneously, so the best quality coffee must be hand-harvested.

This is expensive and time-consuming, so for 10 years ICTI has worked to genetically modify (GM) coffee plants, altering the coffee cherry’s natural ripening process. Farmers would trigger final ripening of the fruit — all at once — with ethylene sprays.

According to Swiss-based watchdog organization Berne Declaration, “Those who rely on picking coffee for their income will suffer when plantations take up mechanized harvesting and reduce their workforce. [Therefore] if there is a commercial advantage of GM coffee, the gain will be made in the agribusiness sector. Smallholder farmers could find their profits further eroded.”

PCC does not and will not sell genetically modified coffee.

All the coffee sold at PCC — brewed, expressed, bagged and bulk — is certified organic, shade grown and Certified Fair Trade™.

ICTI maintains that its decaf and spray-ripened coffee will have production and quality benefits for small-scale coffee farmers as well as larger plantations and agribusiness powerhouses such as Nestlé and Kraft. But just an island away from ICTI’s Oahu test fields, growers of the prestigious and expensive Kona coffee aren’t so sure.

Kona growers are deeply concerned that GM coffee will cross-pollinate and contaminate their crop, rendering their beans much less valuable. GM-tainted beans likely would be rejected in Japan and much of Europe, key export markets.

Kona farmers have reason to be concerned. Greenpeace International estimates more than 200 cases of GM crop contamination have occurred in 57 countries over the last 10 years. Widespread contamination of rice in 2006 with an unapproved GM rice variety led to millions of dollars in export losses, according to the Union of Concerned Scientists.

When StarLink corn, a GM variety approved only as animal feed, was found in the human food supply, more than 300 kinds of chips and flour were recalled.

Even closer to home for the Kona growers, when a GM papaya variety was introduced in Hawaii, the Japanese and Canadian market for exported Hawaiian papaya dried up. Organic papaya growers concerned about pollen drift found high levels of GM contamination in their crop, leading to even greater market losses worldwide.

John Stiles, CEO of ICTI, doesn’t see the risk. Last year, Stiles told the Honolulu Star Bulletin, “Our field trials would have absolutely no effect on Kona coffee, so it doesn’t really make sense to ban field trials of transgenic coffee across the whole state … we don’t want to be known as the anti-technology state.”

The Hawaii State Legislature agreed with Stiles and in March 2008 rejected a statewide ban on GM coffee. In October, pressured by the Kona Coffee Farmers Association, the Hawaii County Council banned GM crops on the Big Island.

For now, no GM coffee can be grown legally on the Big Island but ICTI field trials of decaffeinated coffee were slated to start on Oahu in early 2009. According to filings, ICTI expects to produce its first cup of genetically modified, caffeine-free coffee in 2010.

If trials go well, ICTI will sell GM caffeine-free plants to growers in 2011 and the first GM decaf beans will hit the market in 2014. ICTI continues to move forward with its spray-ripened coffee as well, and expects to begin selling plants with ethylene-controlled ripening traits in 2012.

Erica Strauss is a personal chef, free-lance writer and PCC member who is passionate about food with integrity.