Why genetically modified crops will not feed the world

This article was originally published in October 2008 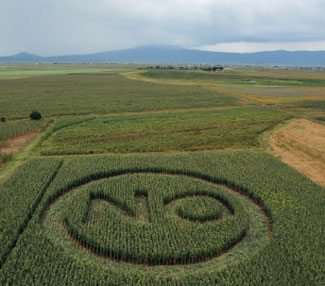 Hype notwithstanding, there is not a single commercial GM crop with increased yield, drought-tolerance, salt-tolerance, enhanced nutrition or other attractive-sounding traits touted by the industry.

According to the World Bank, global food prices have risen a shocking 83 percent over the past three years. And for the world’s poor, high prices mean hunger.

The global food crisis has many causes, but according to the biotechnology industry, there’s a simple solution — genetically modified (aka biotech) crops. Biotech multinationals have been in media blitz mode ever since the food crisis first made headlines, touting miracle crops that purportedly will increase yields, tolerate droughts, grow in saline soils, and be chock-full of nutrients to boot.

Not everyone is convinced. The United Nations (U.N.) and the World Bank recently completed an unprecedentedly broad scientific assessment of world agriculture — the International Assessment of Agricultural Knowledge, Science and Technology for Development (IAASTD) — which concluded that biotech crops have very little potential to alleviate poverty and hunger.

This four-year effort, which engaged some 400 experts from multiple disciplines, originally included industry representatives. Just three months before the final report was released, however, Monsanto, Syngenta and chemical giant BASF pulled out of the process, miffed by the poor marks given their favorite technology. This withdrawal upset even the industry-friendly journal Nature, which chided the companies in an editorial entitled “Deserting the Hungry?”

Genetic engineering involves the laboratory-based transfer of DNA derived from bacteria, viruses or virtually any living organism into plants (or animals) to endow them with a desired trait.

As implemented by biotechnology firms, genetic engineering has followed the path of previous innovations of industrial agriculture. The technology serves wealthier farmers growing commodity crops in vast monocultures by fostering increased use of labor-saving pesticides.

Genetically modified (GM) crops are heavily concentrated in a handful of countries with industrialized, export-oriented agricultural sectors. Nearly 90 percent of biotech acres in 2007 were in just six countries of North and South America, with the United States, Argentina and Brazil accounting for 80 percent. For most other countries, including India and China, biotech crops account for 3 percent or less of total harvested crop area.

For instance, Argentina and Brazil export the great majority of their soybeans as livestock feed, mainly to Europe and Japan, while more than three-fourths of the U.S. corn crop either is fed to animals or used to generate ethanol for automobiles.

Expanding soybean monocultures in South America are displacing small farmers who grow food crops for local consumption, contributing to food insecurity, especially in Argentina and Paraguay. The only other commercial GM crops are papaya and squash, both grown on miniscule acreage.

Most revealing, however, is what the biotech industry has engineered these crops for. Hype notwithstanding, there is not a single commercial GM crop with increased yield, drought-tolerance, salt-tolerance, enhanced nutrition or other attractive-sounding traits touted by the industry. Disease-resistant GM crops are practically nonexistent.

HT crops are popular with larger farmers because they simplify and reduce labor needs for weed control. They thus have helped facilitate the worldwide trend to consolidation of farmland in fewer, ever bigger farms, such as Argentina’s huge soybean plantations.

HT crops also have led to a substantial increase in pesticide use. The most authoritative independent study to date shows that adoption of HT crops in the United States increased weed-killer use by 138 million pounds from 1996 to 2004, while insect-resistant crops reduced insecticide use by just 16 million pounds over the same period.

What about yield?
The most widely cultivated biotech crop, Roundup Ready® soybeans, actually yield 5 to 10 percent less than conventional varieties, due to adverse effects of Roundup on plant performance and unintended consequences of genetic modification.

Unintended, yield-reducing effects are a serious though little-acknowledged problem of genetic engineering, and are one of several factors foiling efforts to develop viable GM crops with drought-tolerance and similar traits.

While insect-resistant crops can reduce yield losses under conditions of heavy pest infestation, such conditions are relatively infrequent with corn. Because cotton is afflicted with so many pests not killed by the built-in insecticide, biotech cotton farmers in India, China and elsewhere often apply as much chemical insecticide as growers of conventional cotton. Also, because they pay up to four times as much for the biotech seed, they end up falling into debt. Each year, hundreds of Indian cotton farmers commit suicide from despair over insurmountable debts.

If biotech crops are not about feeding the world, what is the point? Agricultural biotechnology represents a historic merger of two previously distinct sectors — agrichemicals and seeds.

In the 1990s the world’s largest pesticide makers — Monsanto, DuPont, Bayer and Syngenta — began buying up the world’s seed firms. These four biotech giants now control 41 percent of the world’s commercial seed supply. Their motivations for this buying spree were two-fold: the rise of genetic engineering and issuance of the first patents on seeds in the 1980s.

Biotech firms employ genetic engineering chiefly to develop crops used in tandem with their own proprietary herbicides — selling both as a package. Seed patents ensure higher profits from seed sales, in part by allowing biotech firms to outlaw seed-saving by farmers.

Patents on biotech seeds normally apply to inserted genes (or methods for introducing the gene), but courts have perversely interpreted these “gene patents” as granting biotech/seed firms comprehensive rights to the seeds that contain them.

One consequence is that farmers can be held liable for patent infringement even if the patented gene/plant unintentionally appears in his fields through cross-pollination or seed dispersal. Another consequence is that farmers are sued for patent infringement for saving and replanting seeds from their harvest, a traditional practice of farmers throughout the millennia.

In the United States, industry leader Monsanto has pursued thousands of farmers for allegedly saving and replanting its patented Roundup Ready® soybean seeds. An analysis by the Center for Food Safety has documented court-imposed payments of more than $21 million from farmers to Monsanto for alleged patent infringement. If we include the much greater number of pre-trial settlements, the total jumps to more than $85 million, collected from several thousand farmers.

The United States and European Union are pressuring developing nations to adopt similar gene and seed patenting laws. Because poor farmers often cannot afford to purchase new seeds each year, prohibitions against seed-saving would cause great economic hardship for many.

Biotech firms also have Terminator technology waiting in the wings. Terminator is a genetic manipulation that renders harvested seed sterile and represents a biological means to achieve the same end as patents: elimination of seed-saving.

While international outrage has thus far blocked deployment of Terminator, Monsanto recently purchased the seed company (Delta and Pine Land) that holds several major patents on the technology (together with the U.S. Dept. of Agriculture). Monsanto has “pledged” not to deploy Terminator but also has stated that this “pledge” is revocable at any time.

Biotech seeds are also quite expensive — two to four times as much as conventional varieties. The price ratchets up with each new “trait” that is introduced. Seeds with one trait were once the norm but rapidly are being replaced with two- and three-trait versions.

Farmers who want more affordable conventional seed — or even biotech seed with just one or two traits — may soon be out of luck. As University of Kentucky agronomist Chad Lee put it, “The cost of corn seed keeps getting higher and there doesn’t appear to be a stopping point in sight.” Developing countries that accept biotech crops can count on the same steeply rising seed prices that American farmers face.

Ever since the Green Revolution, the agricultural development establishment has focused on crop breeding and expensive inputs (e.g., fertilizers, pesticides and “improved seeds”) — not least because input-centered schemes offer potential market opportunities for multinational agribusinesses.

One strikingly successful example is the push-pull system practiced by 10,000 farmers in East Africa. Push-pull involves intercropping maize with plants that naturally exude chemicals to control insect and weed pests, which increases yields while also enhancing soil fertility and providing fodder for livestock.

A new dryland rice farming technique dramatically increases yield and is spreading in rice-growing nations. Small farmers like agroecological techniques because they foster independence and reduce expenditures on inputs.

The tremendous hype surrounding biotechnology has obscured some basic facts. Most GM crops feed animals or fuel cars in rich nations, are engineered for use with expensive weed killers (eliminating labor), and are grown by larger farmers in industrial monocultures for export.

Real solutions will require radical changes. Rich nations must stop dumping their agricultural surpluses in the Global South, respect the right of developing countries to support their farmers, and fund agroecological techniques to enhance small farmers’ ability to feed their families and their nation’s citizens.

Bill Freese is science policy analyst at Center for Food Safety, a nonprofit group that supports sustainable agriculture. For more on GM crops in developing countries, see “Who Benefits from GM Crops: The Rise in Pesticide Use,” Friends of the Earth International and Center for Food Safety, 2008, at: www.centerforfoodsafety.org/WhoBenefitsPR2_13_08.cfm.

Notes from the Cellar: Good intentions

The Final Rule, published on August 22, a Friday in late summer, was easily overlooked by a nation on vacation. The 30-day comment period has expired. The FDA’s action was unexpected, but a petition from 2000 still seeks irradiation of many foods. We’ve learned it was at the FDA’s suggestion that the National Food Processors joined with the irradiation industry ...