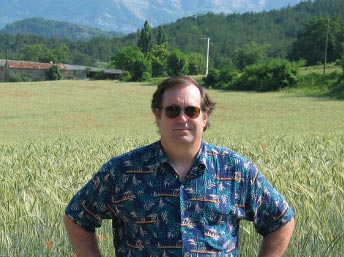 Dr. Charles Benbrook has worked on pesticide risk assessment and regulation for more than 25 years.
Photo by Karen Benbrook.

(September 2008) — What pesticides are used on what food crops? What residues remain when the crops go to market and how risky are those residues? And what about the vulnerable amongst us — are we fully protecting pregnant women, infants and children, and the elderly?

Worrisome evidence that even minute levels of pesticides in food can impair human development has driven demand for organic foods — produced without synthetic insecticides, herbicides or fungicides. Since the beginning of the organic movement, consumers increasingly have made it clear they want toxic pesticides out of their food and off their plates.

Yet a recent decision by the U.S. Department of Agriculture (USDA) to stop measuring the use of pesticides on American farms could make it much harder to track pesticide use and risk trends.

What we know and how we know it
Annually since the early 1990s, the National Agricultural Statistics Service (NASS), an agency of the USDA, has collected detailed data on pesticide use on a representative sample of farms across the country.

Until recently, it issued reports every year for corn, soybeans, cotton and wheat, and periodically for other crops such as oats and sorghum. In odd years, NASS surveyed pesticide applications on fruit and in even years, on vegetables.

The Organic Center’s analysis of government data found that it’s most important to choose organic versions of produce with thin, edible skins.

It determined that the 16 items listed below have the highest dietary risk index scores, in descending order.

For more information, visit www.organic-center.org and browse the “State of Science” section.

Despite some shortcomings, NASS pesticide use data has been the only free, publicly available resource for anyone studying, monitoring, measuring — and attempting to manage — pesticide use and risks. Academics, agribusiness, environmental groups, state officials and the U.S. Environmental Protection Agency (EPA) all have used it in weighing decisions and setting policy.

Many believe the NASS data is essential and that its loss will hobble future research — for instance, on the effectiveness of pest management practices and how pesticides affect water quality.

My wife Karen and I have carried out dozens of studies relying on this data. We combine use data with information on pesticide residues in food that is collected by the USDA’s Pesticide Data Program (PDP).

Each year since 1991 the PDP has tested 10,000 to 18,000 samples of 12 to 20 foods for residues of hundreds of pesticides. The foods tested are chosen from those most important in the diets of infants and children. The EPA uses PDP data to sharpen the accuracy of its pesticide dietary risk assessments.

In the late 1990s, we developed a pesticide dietary risk indicator in work with Consumers Union, and applied this indicator to measure the impacts of what is arguably the most important U.S. public health law passed in the 1990s.

Our analytical work — some of it commissioned by the EPA — shows that considerable progress has been made in reducing pesticide risks in parts of the food supply (such as apples, see below), while little progress and even some slippage has occurred elsewhere, especially in imported produce. There’s also an emerging consensus about where the FQPA has failed to live up to its promise.

Fortunately there are government officials and agencies that want to sustain and even accelerate progress in reducing pesticide risks.

During the Bush era, however, the EPA has made little use of the FQPA’s new tools and powerful mandate. Fortunately, the law remains intact and the EPA largely could finish the job of lowering pesticide dietary risks to meet the FQPA’s new standard by the end of 2009 — if provided direction and support from the new White House and Congress.

The USDA still is collecting and reporting PDP pesticide residue data. But anyone trying to track the source of the residues — what’s being applied where — could be crippled by the decision by NASS to terminate collection of pesticide use data.

It’s often said that what gets measured gets managed. Without measuring pesticide use, we will be stymied in attempts to manage pesticide risks.

The latest pesticide data
In 2008, the USDA released pesticide use data only for apples and cotton in the 2007 crop season. NASS collected no data for corn or soybeans in 2006 and 2007.

The lack of this use data means independent analysts cannot quantify what’s likely to be an enormous increase in herbicide applications since 2005 needed to keep up with resistant weeds on land planted with genetically modified (GM) Roundup Ready® corn and soy.

Reports we issued in 2002 and 2004 relied heavily on NASS data and contradicted industry claims that GM crops were reducing pesticide use.

Now, Monsanto can continue making bogus claims that Roundup Ready technology reduces herbicide use with little fear of contradictory data. (There’s one private source of 2007 pesticide use data that might help fill the void. Stay tuned.)

No pesticide use data has been collected in 2008, so again there’ll be no new data available next year. An unusual coalition of industry and environmentalists, government agencies (including the EPA) and consumer organizations (including PCC) are asking the USDA and Congress to restore the $8 million needed to reinstate NASS’s pesticide data collection activities. Hopefully data collection will resume in the fall of 2009.

Organophosphate (OP) insecticides** are the major risk-drivers in apples. They were before passage of the FQPA, and they still are today.

We use an index called the “Dietary Risk Index” to quantify the level of risk associated with residues found in a given food. DRI scores are a function of the residues found by the PDP, the amount of food usually consumed in an average serving, and the toxicity of the pesticide to humans, as evaluated by the EPA.

Without getting into all the details, our analyses show that: DRI scores for domestically grown apples were six times higher in the years before the FQPA than today (i.e., down from 200-300 before 1996 to around 50 now).

Before the FQPA in 1996, about three OPs were applied on the average acre of apples, totaling five to six pounds of active ingredient. (No wonder so many apple farm workers experienced symptoms of OP poisoning!) By 1999, OP use fell to four pounds per acre, then to three in 2001 through 2007.

Still, about two pounds of azinphos methyl were applied to 62 percent of the apple acreage in 2007, a relatively high rate nonetheless and down in terms of volume by only about 13 percent since 1991. (Of all the azinphos methyl applied in the United States on apples in 2007, 65 percent was used in Washington State.)

Despite the EPA’s soft touch in recent years in implementing the FQPA, the law has reduced the amount of organophosphates applied on apples by about half and has cut dietary pesticide risks from apples to less than one-quarter the level common in the early 1990s.

Full and aggressive implementation of the FQPA — if that ever happens — should drive pesticide dietary risks in non-organic apples down even more. For people that are pregnant, sick, young or old, or those who want an added margin of safety, organic apples and processed apple products have near-zero DRI scores.

But what about progress in reducing pesticide use on pears, cherries, potatoes, wheat and other key Pacific Northwest crops? Sadly, we don’t know. The USDA has decided that collecting pesticide use data isn’t a priority. These crops only occasionally are included in the PDP.

An emerging opportunity
No doubt some agriculture interests feel that the less data generated by government on pesticide use and risks, the fewer headaches from noisy non-profit organizations. This myopic view misses the big picture.

The Pacific Northwest leads the nation in organic tree fruit production and sustainable farming. Many non-organic farmers in our region are moving to purge their production systems of high-risk chemistry and are adopting many practices developed and perfected by organic farmers.

There’s huge, untapped demand in the nation and abroad for high-value, fresh and preserved fruit and vegetable products that deliver taste, nutrient density and superior margins of safety. Also, with energy prices rising and support for local food security increasing, dependence on imported fresh berries, cherries, tomatoes and grapes is likely to dwindle.

Consumers also have yet to understand that eating imported fresh produce (non-organic) triggers a pronounced spike in pesticide dietary exposure. (Visit www.ehponline.org/docs/2008/10912/abstract.html to read the latest research by Dr. Chensheng (Alex) Lu, a scientist that started his work on the impact of an organic diet in reducing pesticide exposure with a study of school-age children in the Mercer Island area.)

Farmers and food processors in the Pacific Northwest are well-positioned to go after this emerging market. A trilogy of benefits awaits — increased demand for Pacific Northwest-grown produce means more jobs in farming and food processing; heightened reliance on healthy, safe and locally grown food; and a lower carbon footprint in getting our three square meals a day.

This emerging market will be values-driven but prepared to pay a premium for assurances of exceptional taste, quality and safety. To be credible, such assurances must rest on data-driven indicators of performance, such as dietary pesticide risk levels.

The measurement and management of food quality certainly scares some interests, but it’s the surest path to progress on many fronts and is a path the Pacific Northwest need not fear.

** Numerous studies show organophosphates (OPs) are toxic to the human brain and nervous system. Two OPs that remain in widespread use — azinphos methyl and phosmet — account for most of the total DRI score for domestically grown apples.

Dr. Charles Benbrook is chief scientist at The Organic Center, a non-profit research group carrying out and disseminating research on the benefits of organic food and farming. Benbrook previously served as executive director of the Board on Agriculture, National Academy of Science.

Notes from the Cellar: On soul

A sustainable agriculture label: coming to foods near you?

Scientific Certification Systems (SCS) of Emeryville, Calif., is pushing for the adoption of a sustainable agriculture label as a U.S. standard for food and other products. Some farmers, producers, certifiers and consumer advocacy groups fear this proposed label will confuse U.S. consumers as they drift through supermarkets.

Letters to the editor, September 2008