Not all shrimp are equal: wild shrimp vs. farmed shrimp

This article was originally published in August 2008 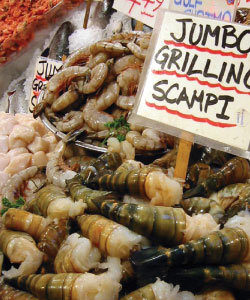 When buying shrimp from other stores, fishmongers and restaurants, be sure to ask if it’s farmed or wild.

(August 2008) — Whether skewered on kabobs, tossed in salads or dipped in cocktail sauce, shrimp is a quintessential summer food, as redolent of the season as melon or sweet corn. It’s as versatile as it is celebratory; it can be dressed up or down — perfect with beer at a casual barbecue or with champagne at a lavish wedding.

Sweet, succulent and easy to prepare, it’s no wonder shrimp has become our most popular seafood, accounting for 30 percent of all seafood sold in the United States.

However, not all shrimp is delicious — or sustainable. Ninety percent of the shrimp eaten by Americans is imported from countries such as Thailand, India and Ecuador, where industrial shrimp farms are destroying the environment and coastal communities, and producing unhealthy, flavorless shrimp.

Although PCC never carries farmed shrimp, we want you to understand some of the problems associated with shrimp found in other stores and restaurants and why it’s important to ask if their shrimp is farm-raised.

Environmental problems
Shrimp farms are the number one threat to mangrove forests, the coastal wetlands that provide vital habitat for tropical fisheries and protect coastlines from damage by storms, hurricanes and tsunamis.

This loss of habitat, in addition to overfishing and the high rate of by-catch that occurs when wild shrimp are caught to stock shrimp ponds, are just a few of the ways that the foreign shrimp industry depletes wild fisheries and threatens biodiversity.

The farmed shrimp industry simply is unsustainable. After a few years, disease and pollution deplete the ponds and shrimp farmers abandon them to create farms in new areas — perpetuating ongoing environmental destruction.

Community problems
In addition to wreaking ecological havoc, shrimp farming also takes a toll on the people of coastal communities. Fishing villages that traditionally relied on mangroves for food and resources have been displaced and impoverished, often without financial compensation or alternative land made available to them.

Shrimp farms block community access to coastal resources, limiting access to fishing sites, wood and building materials, food and medicines. In Ecuador, as much as 80 percent of the population have lost their main source of nutrition due to mangrove destruction.

Shrimp farming also is associated with land disputes and child labor. A new report by the AFL-CIO exposes the sweatshop conditions, forced labor and other exploitations of workers.

Some argue that shrimp farms provide necessary jobs. The reality is that the industry employs fewer people than are sustained by healthy mangroves. The industry also threatens the livelihood of U.S. shrimpers who cannot compete with the low prices of imported shrimp “dumped” on domestic markets.

Health problems
Unsustainable practices by foreign shrimp farms jeopardize the health and food security of both the indigenous people in producer countries and of American consumers.

Most industrial shrimp farms are so crowded and unsanitary that producers must use high levels of pesticides, antibiotics and other chemicals (many of them are banned in the United States) in order to prevent disease. Residues of these toxins end up in the flesh of the shrimp, posing threats to consumer health.

According to some reports, these chemicals may cause neurological problems, allergic reactions, infections, cancer and disease, and because the Food and Drug Administration inspects only about one percent of all seafood, consumers are likely eating contaminated shrimp.

Chemicals are not, however, the only pollutants. Filth (including dirt and rodent hair) and rotten seafood are the leading reasons for the refusal of imported seafood products, and shrimp account for a disproportionately high percentage of refused shipments.

But before you let the unappetizing news about imported shrimp ruin your summer parties, remember there are several varieties from the United States and Canada that are safe, sustainable and tasty. In the Northwest, we’re lucky to have local, wild varieties such as trap-caught spot prawns and Oregon pink shrimp from well-managed fisheries. You’ll find these fresh or frozen at PCC, in addition to white shrimp from the Gulf of Mexico.

You can count on PCC to carry only sustainable seafood, but when buying shrimp from other stores, fishmongers and restaurants, be sure to ask where it came from. You also can consult the Monterey Bay Seafood Watch Guide, a convenient card available at the seafood counters in each PCC store that rates the best and worst seafood choices. Once you know what to look for, it’s easy to make responsible and wholesome purchases!

Eli Penberthy is the associate editor of the Sound Consumer.

Letters to the editor, August 2008