The hands that feed us. 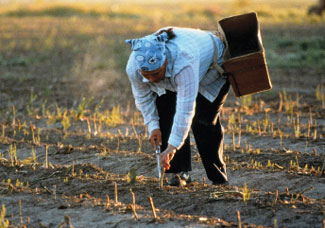 As consumers, we want food that is safe to eat, but we also want fair working conditions for those who cultivate the fresh food we are fortunate to enjoy year round. This worker harvests asparagus in eastern Washington.
Photo by Irwin Nash.

(April 2008) — When we think about the food we eat, we may wonder about how and where the food was grown. But rarely do we think about the two million farm workers nationwide — and the 300,000 here in Washington — who tend and harvest the fruits and vegetables we enjoy so much.

Farming in the United States largely would disappear without this huge labor force, yet farm workers don’t have the right to collective bargaining and overtime pay like other workers. Many are chronically exploited, their human rights ignored.

Washington has the fourth highest number of farm workers in the United States. Their wages, working and living conditions, put simply, are deplorable. The typical worker earns less than $10,000 a year. Many are overworked, housed in unacceptable conditions, forced to work in extremely harsh conditions, and verbally abused.

What we can do

The issues in farm labor are intertwined with immigration, a divisive subject that Congress has failed to resolve.

There are ways, however, for us to support justice for farm workers in our state. Here are some ideas:

Since 1999, the project has sponsored 22 summer internships for law students to work with experienced attorneys and serve farm workers facing risks to their safety and health, discrimination, nonpayment of wages, and substandard housing.

Because it’s funded by charitable contributions, the project is not restricted in its representation of undocumented workers and class action litigation, and it can help tackle some of the most pressing needs.

For more information or to contribute, visit the project’s Web site at www.c4ej.org/ow_laurel.html.

Ask questions, stay informed
You may wonder why we can identify imported foods as Fair Trade Certified (e.g. coffee, tea and sugar), but we cannot identify whether U.S. fruits and vegetables are produced under fair labor standards.

Talk to grocers beyond PCC
Ask other grocers to buy products from growers and processors who provide decent wages, housing and health care to farm workers.

Tell them how much more you’d be willing to pay for a product that’s produced by people who are treated fairly and humanely.

Advocate
Call or write your legislators and congressmen to let them know you want to buy U.S. foods produced under fair labor standards. Specifically, ask them to support:

They often don’t seek help because they don’t know where to turn or because they’re afraid. When they do assert their rights — knowing they risk being fired, blacklisted or deported — there aren’t enough advocates to represent them all. This “justice gap” is an enormous challenge in our state and across the nation.

The following stories are just two among thousands but provide a glimpse into the challenges these workers face. Perhaps they’ll stimulate conversation about what we can do to support these members of our community who do the hazardous work that puts fresh food on our tables.

The H-2A program: Abuse of workers
José Pérez has worked nearly his whole life in the fields. Since 1996, he has worked in the Sunnyside area of eastern Washington harvesting, thinning and pruning — sometimes up to 18 hours a day and frequently under the command of disparaging supervisors. He says, “It’s the work most people don’t want to do.”

In 2004 he went to work for a Yakima Valley orchard that decided to use the H-2A program to bring in “guest workers” fromThailand. The H-2A program allows agricultural employers to obtain temporary visas for foreign workers when there aren’t enough workers available locally to do the work. Employers first must advertise the jobs and offer to pay the prevailing market wage in the area, or the federal minimum wage for the H-2A program, whichever is higher. If the growers can’t find enough local workers, then they’re allowed to import H-2A workers.

In the pear harvest that year, one grower changed the way local workers were paid — from an hourly to a piece rate based on each bin filled. The grower had agreed that the rate for pears was $19 a bin but changed it to $12 or $13 a bin. At that rate, the workers earned a little more than half what they previously made at the hourly rate. When José and his co-workers asked for a better rate, the grower responded by firing the entire crew, including José.

José fought back. With the help of Columbia Legal Services and a private law firm, he and two other workers brought a class action lawsuit against Global Horizons and the two fruit growers, charging that the companies discriminated against local Latino workers by replacing them with Thai guest workers.

In September 2007, a Yakima jury found that Global Horizons had discriminated against the local workers and awarded $300,000 in punitive damages to the class of 600 local workers, including José. The judge in that case also found that Global Horizons and the growers violated the Washington Farm Labor Contractors Act by failing to disclose worker productivity requirements, and by misleading local workers about transportation arrangements. The court is expected to assess additional damages for these and other violations.

Despite this successful legal action, increasing numbers of H-2A guest workers flow into our state and problems with the program continue. Guest workers often live in “debt servitude,” having taken huge loans and mortgaged property in their home countries to pay recruiters for the chance to work in the United States.

When they get here, they often find they were misled about the amount of work or the pay, and employers make deductions from paychecks that bring their wages below minimum wage. Guest workers have no real bargaining power because they can work only for the employer who obtained their visa. If they complain, they may be fired and sent home, and later blacklisted by recruiters.

Fortunately for José, his story ends well. Now 61, he has found a job checking and changing tires for a trucking company. He makes more than $10 per hour and has a regular schedule, breaks and health insurance. He likes his new work. As he says, “No one asks that I do more work. I know what I have to do. At break time I can get a coffee. I feel good.” His companions are not so lucky and still struggle to find decent work in the fields and orchards.

Heat-related dangers
From 1965 to 2005, Manuel Camacho worked for Roy Farms in Moxee, outside Yakima. For 40 years, sometimes in 100+° F heat, the employer provided no water and workers often skipped breaks because they were paid by the piece rather than by the hour. Each day, Manuel took two gallons of water with him but he didn’t know that even that much water was not enough to keep him safe in such hot weather.

Manuel wore light clothing and a hat but he suffered from headaches, nausea, dizziness, muscle cramps and weakness. He had no idea these symptoms were caused by heat exposure and dehydration.

On July 18, 2005, at the age of 64, Manuel left for work at 4:30 a.m. carrying his two gallons of water. He had to wear leather chaps to protect his legs while cutting grass with a machete in the hops fields.

At 11:45 a.m., the foreman went to Manuel’s home to tell his wife, Otilia, that Manuel had been taken to a medical center in Yakima. When she got there, he was unconscious and on oxygen and IV fluids, badly dehydrated, and had a core temperature of 109 degrees. A few hours later, Manuel died of heat stroke.

After the heat-related deaths of Manuel and two other Washington workers, worker advocates petitioned the Washington State Department of Labor and Industries (L&I) to adopt rules to protect workers who labor in outdoor heat. In 2007, L&I adopted an emergency rule requiring that employers provide workers with at least a quart of fresh drinking water each hour, access to cooling areas and medical attention, and training on how to prevent heat illness.

L&I now is considering permanent rules, which would be a major step forward for outdoor workers in our state. Heat-related deaths dramatically decreased in California when it adopted rules similar to those now being implemented in Washington. With good enforcement, we should have similar success here.

We’re stronger together
Farm workers and PCC consumers are natural allies. As consumers, we want food that is safe to eat, but we also want fair and safe working conditions for workers who cultivate our food — those workers who already are here, and those who are brought here under the H-2A program.

We all should exercise our power as consumers by telling the food industry and our state and federal governments that we demand fair treatment for the men and women who provide us with the fresh food we are fortunate to enjoy year round.

Postscript May 29, 2014 — A Washington federal judge on Wednesday threw out discrimination claims against two farms in Washington’s Yakima Valley by the U.S. Equal Employment Opportunity Commission, leaving farm labor contractor Global Horizons Inc. as the sole defendant in a human-trafficking case over the treatment of Thai workers.

Senior District Judge Edward F. Shea granted Green Acre Farms and Valley Fruit Orchards summary judgment on all the EEOC’s Title VII liability claims, saying the EEOC failed to provide evidence that the growers subjected the agricultural workers to a pattern and practice of a hostile work environment, among other adverse condition claims. In his order, Judge Shea said, “Title VII is not aimed at eliminating all unpleasant, rude and uncomfortable conduct in the workplace, rather its aim is to prevent discrimination in the workplace based on a listed protected status.”

EEOC spokeswoman Christine Nazer told Law360 Thursday that “at this point, we are reviewing the decision to determine our next steps.”

Matt Geyman is an attorney with Phillips Law Group in Seattle and is chair of the Laurel Rubin Farm Worker Justice Project.

Insights by Goldie: How sweet it isn't: GM sugar beets

The Environmental Protection Agency (EPA) — to its shame! — recently approved a request by Monsanto to increase by 5,000 percent the amount of the toxic herbicide (glyphosate) residues that sugar beets can contain. The roots are the storage unit and producers of the sugar! Now there’s a tasty treat for the kiddies.