by Natalie Reitman-White and Sarah Mazze

This article was originally published in March 2008 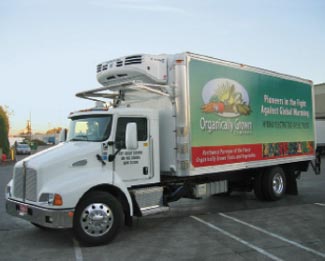 The Organically Grown Company reduces its carbon footprint with its new model of trucks that save 10 to 30 percent on fuel and run on a 99 percent biodiesel blend, sourced primarily from used cooking oil.

(March 2008) — Are you stumped by which has a lower carbon footprint: chemically grown Washington apples or organic New Zealand Fujis? Do you wonder which is worse for the climate: processed soy or pastured beef?

The abundance of our choices — including year-round availability of food from around the globe — depends entirely on a steady supply of fossil fuels. The concept of “food miles” has brought needed attention to the carbon footprint of the American meal. But food miles alone cannot provide the complete picture of the greenhouse gas emissions associated with what we eat.

Fossil fuel inputs, and therefore carbon dioxide (CO2) and other greenhouse gas (GHG) emissions, exist in all stages of food production and distribution — from plowing and fertilizing fields to processing and packaging the food — and every phase of transportation, from the field to the consumer’s home. To paraphrase author Michael Pollan, our food is marinated in crude oil by the time it reaches our table.

According to the EPA, agriculture accounts for a whopping 7 percent of total GHG emissions in the United States, primarily nitrous oxide from fertilizers and methane from livestock. This figure does not account for the CO2 emissions from food-related transportation, manufacturing, storage and cooking mentioned above.

The good news is that there are choices we can make to reduce our climate impact. One primary way to reduce our carbon footprint is to reduce the “oil” from our diet. Perhaps trickier is to limit the other diet-related greenhouse gases.

But how do we distinguish which food choices have a lower greenhouse gas impact? And how do we balance these considerations with convenience, cultural tastes, nutritional needs and the pleasure of eating? While the answers are not all straightforward, arming yourself with a framework to make decisions can alleviate some food shopping dilemmas.

Go organic
Organic farming is a powerful tool in the fight against global warming, according to findings of the Rodale Institute’s Farming Systems Trial (FST) that began in 1981. In collaboration with Dr. David Pimentel of Cornell University, the FST found that organic farming systems have the potential to use 30 to 50 percent less energy than non-organic farming systems.

USDA researcher David Doubs, Ph.D., found that this difference is due to the fact that organic matter decays more slowly in organically managed soil, in part because organic soil has more microbial activity — key to carbon sequestration.

Finally, non-organic farms generally rely on synthetic fossil fuel-based pesticides, fertilizers and herbicides, which require additional energy to manufacture, ship and apply. Organic farms, on the other hand, rely more on beneficial insects to control pests and on manual labor for weeds.

Eating with the seasons
Typically, eating locally grown foods in season can trim your GHG emissions while also supporting local farmers and your community’s food security and offering flavor-packed meals.

Enjoy fresh asparagus in the spring and eggplants in summer to cut carbon. Tomatoes that appear in the dead of Washington’s winter either traveled from outside our region or grew in a hothouse, both of which require additional fuel inputs. In the case of the hothouse, fossil fuels probably were used for plastic covering and heat.

Planes, trains and trucks
In 2001, the Leopold Center produced a seminal report showing that “food miles” — the average distance food traveled from where it’s grown to where it’s purchased — were increasing across America. The term “food miles” now is part of the national lexicon, reflecting concern about the pollution caused by flying, trucking and shipping food around the globe.

The challenge is that lower food miles don’t always translate into lower carbon emissions. Recent studies reveal that the difference in emissions between modes of transport can be staggering. A 2006 study by the Stockholm Consumer’s Association showed that transporting broccoli 12,000 kilometers from Ecuador to Sweden by boat produced only 40 percent of the GHG emissions of trucking broccoli 3,200 kilometers across Europe from Spain.

Air freight has the highest carbon emissions of any form of transport. It can generate up to 177 times the emissions of shipping, according to the U.K. Soil Association, which has launched a major campaign against airfreighted food products.

These studies reflect the importance of considering the mode of transport together with food miles in buying decisions.

Sustainable meat
Livestock production is responsible for 18 percent of the world’s human-caused GHG emissions, according to a report by the United Nations. The CO2 portion of these emissions derives from deforestation and other land-use changes for grazing and feed production, as well as from fossil fuels used to refrigerate, transport and fertilize crops for feed production.

Recent studies from Lincoln University found that, for the British, importing dairy products and pasture-raised lamb from New Zealand produces fewer CO2 emissions than consuming dairy and lamb raised on a concentrated diet in English feedlots.

Fertilizers for producing livestock feed crops also result in nitrous oxide emissions, while poor digestion from eating an unnatural diet causes even more gas (including burping), accounting for 35 to 40 percent of global emissions of methane — a greenhouse gas that’s 21 times more potent than CO2. Livestock overall add about 80 percent of agriculture’s total contribution to GHG and more than 50 percent of the emissions from land-use changes.

For the consumer, by simply decreasing the amount of meat in our diets from 35 percent of calories to 20 percent, we can have the same impact on personal GHG emissions as switching from driving a Camry to a Prius hybrid, according to researchers Eshel and Martin at the University of Chicago.

Nutritionists already advise that three ounces of meat is the recommended portion for health, far less than what is typical in the American diet. Adjusting our diets would be good for personal health as well as the planet!

The Chicago study showed also that a fish-based diet is second only to a red meat-based diet in creating GHG emissions. Diets that include chicken and diets that derive protein from dairy and eggs tie for third — but only when a non-meat diet includes the same number of calories from animal products, such as cheese, yogurt, milk, butter and eggs. (A vegetarian diet generally is more energy efficient and lower in GHG emissions since fewer calories come from animal products.)

The authors conclude that if the entire country switched to a plant-based diet, that alone could trim our national GHG emissions by 6 percent.

Whole nutrients
According to a life-cycle assessment of the food system by the Center for Sustainable Systems at the University of Michigan, 23 percent of the energy used in the U.S. food system is for processing and packaging. Foods in their whole, natural form embody less of the energy and emissions associated with manufacturing, packaging and transportation between farms, processing plants and retailers.

Home energy and growing your own food
In the comfort of your own home, 30 percent of the energy in the U.S. food supply is used for refrigeration, cooking and dishwashing. Refrigerators tend to use more energy than any other household appliance. Find out how efficient your fridge is at www.homeenergy.org/consumerinfo/refrigeration2/refmods.php and consider unplugging that old, inefficient fridge in the garage.

Purchase renewable energy from your utility, or install solar hot water or electricity at home to eliminate emissions from all your home energy use.

Finally, growing your own food can eliminate transportation, manufacturing and packaging emissions.

Waste vs. compost
About 4,000 calories of food are produced per U.S. resident per day, despite recommendations that we eat closer to 2,000 daily calories. That extra food ends up in landfills and on our ballooning waistlines. Reducing waste cuts out the life-cycle emissions embodied in those wilted greens that get tossed at the end of the week!

If the greens have to go, composting them will reduce their end-of-life emissions. The reason is that when organic matter decomposes aerobically in a compost pile, it releases CO2 rather than the methane released when organic matter decomposes in landfills without oxygen. Home composting also reduces emissions from transporting waste, frees up space in the landfill, and may save you money if you can decrease your trash services.

Setting a low-carbon table
Growing concern about climate change has spurred greater awareness of how personal choice and consumption make a difference in lowering global carbon emissions. Every product we consume has a “carbon footprint” — the emissions resulting from a product’s life cycle, including production, distribution and consumption.

The supermarket is one place where conscientious consumers are taking on the challenge to make “low-carbon” buying decisions. There are many choices that can reduce the carbon footprint of our diets.

We don’t have to compromise taste, nutrition and, most of all, the pleasure of eating. Trading a little convenience now for an inconvenient truth later may be the equation to consider.

Natalie Reitman-White is the sustainability coordinator at Organically Grown Company, the Northwest’s largest distributor of organic produce. She also manages the Food Trade Sustainability Leadership Initiative at the University of Oregon.

Notes from the Cellar: Seven squared