This article was originally published in December 2007 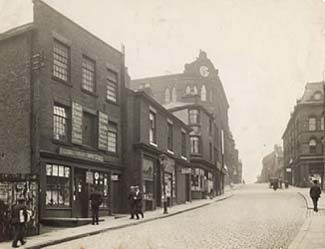 (December 2007) — In December 21, 1844, the Rochdale Equitable Pioneers Society opened a small store in England with five items and little fanfare. It was the beginning of the modern cooperative movement.

Let’s step back in time to understand the forces that created cooperative history.

In the summer of 1843, a 31-year-old Charles Dickens journeyed to Lancashire to see for himself how life was lived in the industrial north of England. To feed his insatiable journalistic curiosity, he visited a workhouse in Manchester to see how the poor were surviving the “hungry forties.”

Dickens was taken aback by the terrible conditions he saw in the midst of burgeoning wealth. In the bustling heartland of the Industrial Revolution he saw two Englands — one rich, the other poor.

The next day, speaking before well-to-do aristocrats and mill owners at Manchester’s prestigious Athenaeum Club, he urged them to overcome their ignorance, which he said was “the most prolific parent of misery and crime.” Dickens implored them to empathize with the workers and act to “share a mutual duty and responsibility” to society.

On the train back to London, impacted greatly by the poverty and misery he had seen, he conceptualized “A Christmas Carol.” He began writing the classic Christmas story a week later and completed it in just six weeks. Christmas has never been the same since the book’s publication on December 19, 1843.

Since 1844, cooperatives have grown to have tremendous global impact:

As revolutions simmered throughout Europe, Dickens counseled that hearts must hear and eyes must see for society to change. In Dickens’ mind, the Bob Cratchits and Tiny Tims of the world would have to wait for the Ebenezer Scrooges to experience hell before heaven could be made upon earth.

In time, Dickens would return to the Lancashire mill towns to gather information for another look at the Industrial Revolution in another book, “Hard Times.” Dickens’ solution in much of his writing was the voluntary transformation of the rich and powerful.

For Dickens, however, “A Christmas Carol” was semi-autobiographical, reflecting the experience of his father in “debtor’s prison” and the suffering within his family. It also was a social commentary on the tremendous conflicts transforming British society as a result of the Industrial Revolution. Scrooge’s peaceful transformation was not practiced enough by the self-interested industrial aristocracy; five years later, revolutions erupted throughout Europe.

Rather than wait for revolution, the cooperators in the town of Rochdale called a meeting at the Weavers Arms, near Toad Lane just before Christmas of 1843. At that meeting, the Rochdale families decided that rather than wait for the cotton and woolen mill owners to do something for them, they had better do it for themselves.

It took the determined textile workers almost two years before they had collected enough of their meager savings to open up their small co-op. Their immediate aim was to get better quality food at decent prices and provide some of them with jobs. Their ultimate goal was to use the co-op’s profits to create their own community where working and living conditions would be better. Amongst the “satanic mills,” they would build their “New Jerusalem.”

The co-op opened almost one year to the day after publication of “A Christmas Carol” — on December 21, the winter solstice, the longest night of the year and also Christmas Day under the old Gregorian calendar. However, for members of the newly formed co-op called the Rochdale Equitable Pioneers Society, the holiday season would not be one of gifts or gaiety but of consternation and caution.

On that Saturday night at 8 p.m., a small group of the Rochdale Pioneers and their families huddled together in the shop to witness the store’s opening. The temperature was below freezing and made worse by the damp in the almost empty warehouse at 31 Toad Lane in Rochdale. They could hear the clattering of wooden clogs on the busy, cobbled streets outside. Tired textile mill workers were hurrying home to find warmth from the winter chill.

As church bells across the street struck the appointed hour, the founding members heard each chime with beating hearts. Then, James Smithies went outside and took the shutters off the windows. With the final shutter removed and a few candles bravely lighting the store’s bay windows, the modern cooperative movement began. This little shop in Rochdale, England would be its birthplace and these humble, hard-working families its founders.

When the co-op opened there was no ceremony or cheering to be heard, only the jeering of the “doffer boys” laughing at the idea of it all. The doffer boys were the mischievous factory lads of the era. The shop was, by their account, a silly dream of weavers and another idealistic experiment in brotherhood bound for bankruptcy.

On the almost bare counter were proudly yet sparsely arranged the co-op’s five items for sale: six sacks of flour, one sack of oatmeal, 56 pounds of sugar, 25 pounds of butter, and two dozen candles. The entire stock, worth about 25 dollars, could have been taken home in a wheelbarrow.

The ground floor they had rented for 10 pounds (18 dollars) per year measured 23 feet wide and 50 feet deep — a total of 1,150 square feet. The shop itself was only 17 feet deep and measured 391 square feet; the remainder was used for storage and as a meeting room.

Fortunately, the staunch beliefs of the Pioneers filled the store with hope. This opening day was difficult, as was the next day and the day after, but their strength was in daring to dream of tomorrow.

The day before the store opened, the Pioneers supplied the volunteer staff members with green aprons and sleeve coverings in the same shade of green used by the Chartists, a people’s movement for political rights and democracy in Britain. Many of the Rochdale Pioneers were, in fact, Chartists agitating at that time for one man, one vote. Parliament had given voting rights only to male property owners, who were just 4 percent of the total Rochdale population.

Two million people signed the Chartist’s petition to Parliament. After the petitions were rejected, the disappointed Rochdale Chartists turned to self-help and cooperatives. The sad ending of one democratic movement gave birth to the success of another.

On the day the co-op opened, membership in the Rochdale Pioneers numbered 28. Most of the Pioneers invested 1 pound (equivalent to two weeks’ wages in 1844) for one share. They had drawn up their principles and rules of operation, which combined a utopian purpose and useful practicality.

The need appeared so great that only something powerful could change their circumstances. These weavers had dreams and they were going to do something about them.

The cooperative idea soon took hold. In town after town, the Cratchits of England joined their local co-op. These Bob Cratchits shared their skills, optimism and idealism with the fledgling organizations, and the Bess Cratchits offered money management, organizational capacity and determination. For the first time in their lives, the women of England had a vote of their own, in a co-op of their own.

Over the years, the cooperative model changed life in England dramatically. At its peak in the 1930s, 8 million British families owned their own co-op stores, factories, houses, a co-op bank and insurance company — just as the Rochdale Pioneers had dreamed.

People on every continent now are patronizing their cooperatives to meet their needs for food, credit, housing, work and enterprise. Cooperatives continue to help develop people and communities, economies and democracy.

A holiday remembrance
At this time of year, candles are lit around the world for Christmas, Hanukkah, Kwanzaa and other festivals. People in different languages and different faiths pause to give thanks for family, fellowship and a better life. However, no one speaks for all humanity better than Dickens’ Tiny Tim, “God bless us, every one!”

The Rochdale Pioneers would be proud of their legacy of economic and social justice. The candles that gave light in Rochdale that night may be remembered in the candles being lit around the world. The cooperatives and credit unions serving more than 800 million families worldwide today are strengthening communities everywhere.

In Rochdale, during the holiday season and especially on December 21, the Victorian gas lamp outside the original co-op store on Toad Lane seems to shine a little brighter. It is on this very night that the lights were lit.

David J. Thompson is author of “Weavers of Dreams: Founders of the Modern Cooperative Movement,” co-author of “Cooperation Works” and “A Day in the Life of Cooperative America” and has written more than 200 articles about cooperatives. He is president of the Twin Pines Cooperative Foundation, sponsor of the Cooperative Community Fund Program.

This article is copyrighted and not to be reprinted without the author’s permission.

The holiday dilemma: meeting the dietary needs of guests

Shop for social change with the Puget Sound Community Card

Letters to the editor, December 2007