This article was originally published in June 2007 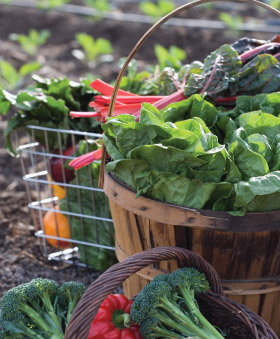 (June 2007) — As foodies across the country debate the merits of local versus organic food, Time magazine has climbed into the ring, grabbed the microphone and announced to the crowd, “The winnah . . . Local!”

With “Forget Organic, Eat Local” stickered on an apple for the March 2, 2007, cover, Time let us know the argument was settled. Good guy wins, bad dies.

I have issues with author John Cloud’s methodology and conclusions. But I can’t blame Time for its eager entry into the discussion. After all, the topic of food values is an easy stream to pan. The discussion engages well-educated, well-informed, socially and politically active people who view their spending power as a vote in favor of their values. Who wouldn’t want to hang with a crowd like that?

Because we’re no longer in direct touch with the production of most of our food (despite gardening, shopping farmers’ markets and even visiting local farms), we rely upon second-hand information to be informed about what we consume. Which means that we’re as likely to encounter misstatements, distortions and oversimplifications as we are verifiable information. The Time article, while relatively short on information, certainly was long enough on the other items.

The natural foods movement is receiving so much play now that there’s an inevitable effort to make it simple enough for mass consumption. You’ve heard the sound bites: “Local is the new organic,” “Food miles” (from farm to plate), and “Beyond organic.”

Reduction of the complex goes against everything we’ve struggled to achieve. The creation of sound bites requires that truth be sacrificed in the name of the quick and easy and the point of the natural foods movement never has been about the quick and easy, (that being Betty Crocker’s job). Rather, we’ve sought the complete, the whole, and typically that means the complex.

As an activist trade professional employed by Organically Grown Company (OGC), I battle most days against efforts aimed at reducing the complex dialogue about food — especially organic produce — and its distribution. So when Time magazine carries out such a sloppy, high-profile hit on what we hold dear, it creates considerable concern among many of us who work to feed you as well as you deserve to be fed.

So, rather than participate in the conspiracy against the complex, let’s examine the path that John Cloud and Time took to reach the conclusion that the poisoned apple — literally — was better than an organic one.

First, regarding terms. When I participated in competitive debate during my school years, we learned that the first order of business is to agree on what it is you’re disagreeing about. “Organic” is pretty well defined but what is “local”? When discussing food, I figure it means something very close — say, something produced within 15 or 20 miles.

Much further than that and I figure you’ve gone “regional.” “Regional,” in fact, is how OGC refers to our brand, LADYBUG, “the Northwest’s Finest Organic Fruits, Vegetables and Herbs.” We represent farmers in Oregon, Washington and British Columbia (and Idaho, at times).

John Cloud advances the notion that “local” means what you can source within a casual day’s drive. Wow. A casual day’s drive from my casa in Eugene could put me in Chico or Seattle and that seems like a lot more turf than “local.”

But I’ll go with him on this one, although such a broad definition has consequences — starting with Cloud’s statement that “even if most Americans wanted to buy locally grown organics, they wouldn’t be able to find any.” Based on his definition of local, I don’t believe that’s true. From what I’ve seen, the vast majority of Americans can find regionally grown organic foods, seasons permitting. That’s a significant caveat for those of us in the Pacific Northwest as well as the Northeast.

Cloud claims that local “promises healthier bodies and a healthier planet.” The food is fresher and, therefore, more nutritious, he says. The food hasn’t traveled as far or been refrigerated, so it tastes better.

He ignores the source of everything else he eats, but wants to know the source of his “whole” foods. “I would still rather know the person who collects my eggs or grows my lettuce or picks my apples,” he writes, “than buy 100 percent organic … from an anonymous megafarm at the supermarket.” He also says that “eating locally also seems safer.”

Then just before letting us know he ate a Filet-O-Fish at McDonald’s on his way to Ted’s farm, he tells us “I keep Ted in business and he helps keep me fed, and the elegance and sustainability of that exchange makes more sense to me than gambling on faceless producers who stamp organic on a package thousands of miles from my home.”

Before examining his positions on the superiority of local, I have to freak out over one other statement by Cloud: “If scientists could prove conclusively that agricultural chemicals are harmful, we would all go organic.” Say what?

We don’t need to prove that agricultural chemicals cause cancer to know they damage our soil and water, animal health, farm worker health and play a serious role in overall environmental degradation. Synthetic pesticides were designed to pass through plants into the environment where they persist. If you only look at the poisoned apple it may appear good, but a look at the whole system that produced the apple will show something very different.

Chemically grown “local”
The ugly truth is that we know plenty about the impacts of chemicals in agriculture, and now the “local” movement appears ready to write off those impacts while making its case against the big bad organic trade that supports “megafarms” and “faceless producers.”

I don’t buy it. I don’t understand why anyone would support farmers who contribute to the problems from chemical agriculture — affecting the local foodshed — when they have an organic choice.

Cloud is concerned with the food miles required to bring organics to market, and certainly, shipping produce long (or even short) distances creates environmental problems. But what he ignores is that chemical ag not only uses petroleum to run tractors and trucks, it also uses petroleum to create fertilizers and pesticides. It leaves us not only with greenhouse gases but toxicity. Local toxicity.

My brother, Tom, an organic grower since the mid-70s, takes this view: “If I’m going to eat non-organic produce, I would rather buy it from farmers who are poisoning someone else’s watershed than the one I live in.”

Cloud’s arguments — that local is more nutritious and tastes better and that food that’s been refrigerated doesn’t taste as good — it’s a bucket full of holes. There’s no truth in those assertions.

As soon as fruits and vegetables are harvested they begin to break down. The best way to assure nutrition and flavor is to arrest that process while speeding the journey to the dinner table. That may mean running garden corn to the pot of boiling water in the kitchen, or it may mean icing the broccoli for the trip to market.

Most everyone I’ve met in the organic trade believes produce should be harvested as close to ripeness as possible, which is something the non-organic produce trade has moved away from. But no one believes that good post-harvest handling practices — such as chilling produce— compromises the value of the product.

Cloud stands on very mushy turf here. He asserts that the reason his apple’s taste suffers is that it “was crated and refrigerated and jostled for thousands of miles.” I’m willing to bet that whatever destroyed the flavor of that apple was not the crating, refrigeration or jostling. Much more likely, it was due to several other things that impact the quality — such as variety, age of the fruit, or how long it sat on a produce rack at room temperature.

Here’s a little experiment anyone can carry out. Cut a head of lettuce from a local garden and leave it out at room temperature for a few hours. Meanwhile, go purchase a head of lettuce that has been grown in California, properly handled after harvest and displayed on a refrigerated produce rack in a store near you. Which is in better shape? Quality is determined primarily by decisions involving when to harvest and how to handle produce, not the distance traveled.

The faces of organic
Finally, I object to the notions of the organic trade consisting of “megafarms” and “faceless producers.” There are a few “megafarms” in the organic trade. But for the most part, organic ag is being carried out by small and medium-scale farms across the United States.

As PCC’s primary produce partner, OGC focuses on bringing produce from those farms into your stores. Farms such as Tom and Denesse’s “T&D Willey;” Phil Foster’s “Pinnacle;” Bill Brammer’s “Be Wise;” Dennis Holbrook’s “Southwest Organics;” and Rich Johansen’s “Johansen Ranch” are precisely the type of farms that deserve all the support we can provide. They are family owned and operated, they have long traditions of organic production, and they are pursuing sustainability on many fronts.

Additionally, the organic trade is supporting numerous grower groups in the third world. I participated in a strategic planning process with growers and staff at Del Cabo, an operation in Mexico famous for its cherry tomatoes. One exercise involved each person identifying the most important event in their life. For half the participants the most significant event in their lives was the day they met Del Cabo’s founder, Larry Jacobs.

Their participation in Del Cabo and Larry’s ability to bring Del Cabo farm products into the U.S. (and PCC) allowed these people to achieve a level of prosperity and pride they never had known before.

Last December, one of OGC’s buyers traveled to Peru to visit the Pronatur mango operation. The farmers were waiting excitedly for the U.S. visitors and showed their appreciation with a brass band! For these people, selling organic fruit to the U.S. is their single opportunity to participate in a global economy and gain the level of prosperity it offers.

All these growers may be faceless to a writer in New York. But if one chooses to venture into the fields, faceless producers quickly become as human as the farmer a few miles away … and deserving of our support.

David Lively has been active in organic agriculture since 1978 and is the marketing director at Organically Grown Company, which is PCC’s primary vendor of organic produce. Since 1982, OGC has been the largest distributor of organic produce in the Pacific Northwest, pursuing its mission of “Promoting health through organic agriculture as a leading sustainable organization.” David was the keynote speaker at PCC’s May 1 annual meeting. (See 2007 Annual Meeting recap)