A campaign for safer bodycare

This article was originally published in May 2007 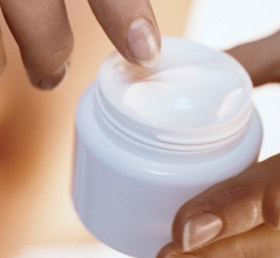 (May 2007) — Consumers generally have wised up that toxic chemicals have been added to our food, water and air, but they generally aren’t aware that beauty and body care products also may include a chemical cocktail.

Unlike food and drugs, the ingredients in cosmetics and personal care products do not have to undergo safety testing before they’re sold to the public.

“Consumers believe that if it’s on the market, it can’t hurt me,’” says John Bailey, Ph.D., director of the Food and Drug Administration’s (FDA) Office of Cosmetics and Colors, “and this belief sometimes is wrong.” The FDA has no authority to require safety tests of personal care products and has no definition of the term “safe” as it applies to them.

The Environmental Working Group, a nonprofit known for ranking pesticide residues in produce, reports that only 11 percent of 10,500 personal care product ingredients have been assessed for safety by the cosmetic industry’s review panel.

The American stance is the opposite — innocent until proven guilty. We don’t limit use of a chemical unless there’s proof of harm.

Remember thalidomide? The lesson is what we don’t know might hurt us.

How can I learn more?

A new approach
The Campaign for Safe Cosmetics (CSC) was started in 2002 by groups such as the Breast Cancer Fund, Environmental Working Group and National Environmental Trust. As outlined on the Web, the “goal is to protect the health of consumers and workers by requiring the health and beauty industry to phase out the use of chemicals linked to cancer, birth defects and other health problems, and replace them with safer alternatives.”

The campaign invites manufacturers and retailers to sign on to the Compact for Global Production of Safe Health & Beauty Products. Participants pledge that within three years they’ll meet the formulation standards and deadlines set by the European Union Directive, which requires products “to be free of chemicals that are known or strongly suspected of causing cancer, mutation or birth defects.”

A little won’t hurt — will it?
What most people don’t realize is that our skin is a sponge. It absorbs very well. Many of us choose organic produce and products for simple reasons — higher quality food without harmful chemicals. Being choosy about our skin care products is a good idea, too.

Evidence is mounting that many body care products have the potential to be a health threat. Every day we use a combination of soaps, shampoos, conditioners, lotions and antiperspirants. Women add more to the chemical exposure by using make-up, hair and nail treatments. We may think, just a little won’t hurt. But the problem is that toxic chemicals can have health effects even at very low doses, and we’re often re-exposed.

One example is phthalates, a common ingredient in nail treatments, lotions, hairsprays, perfumes and deodorants (as well as pliable, vinyl plastics). Phthalates are reproductive toxicants.

A 2005 study by University of Rochester researchers Shana Swan and colleagues found that baby boys whose mothers had greater exposure to phthalates were more likely to have altered genital development. Phthalate exposure also is linked to lower sperm counts, reduced sperm motility, and damaged sperm in men.

One popular brand of nail polish, OPI, recently removed dibutyl phthalate (DBP) from its products. OPI also has pledged to remove toluene, a solvent linked to breast tumors in animals. While those are positive shifts, OPI’s products still contain formaldehyde. Formaldehyde and some forms of toluene are on the U.S. National Toxicology Program’s list of chemicals “Reasonably Anticipated to be a Human Carcinogen.”

Cancer and other health concerns are on the rise. Some think the solution is to “find the cure,” but it’s probably more beneficial health-wise and financially to find the cause and eliminate that.

Who is the “find a cure” battle really helping? Pharmaceutical companies certainly benefit from the need for new drug development, and some corporations have spun “fighting for a cause” into a way to sell more products.

An example of this is seen in an article written by Sandy M. Fernandez for “Think before you pink” — a project of Breast Cancer Action. “In the mid-1980s, the corporate world was discovering cause-related marketing,” she says. “Carol Cone, founder of Cone Communications, was a major force in this development. Research underwritten by her small Boston-based public relations firm proved that, given the same cost and quality, more than half of consumers would switch from a particular store or brand to one associated with a good cause.

Armed with this data, Carol Cone set out to teach America how to do well by doing good. In 1993, she set about helping Avon cosmetics stake out a claim on breast cancer.” These companies may raise awareness of a problem, but they also aim to profit from it. Avon and many other corporations manufacture and sell products that may contribute to the cause of their “cause.”

According to “State of the Evidence,” published in 2006 by the Breast Cancer Fund and Breast Cancer Action, “a woman’s lifetime risk of breast cancer has nearly tripled during the past four decades.” Have our bodies evolved so quickly? Or is it that our environment is changing too rapidly for us to adapt?

Avon currently sells 69 products listed under “high concern” on the Skin Deep Web site — a project of the Environmental Working Group in support of the Campaign for Safe Cosmetics. How can Avon be a standard bearer against breast cancer yet make products that may contribute to cancer? One redeeming point — Avon has signed The Compact for Global Production of Safe Health & Beauty Products.

There are companies, however, who will not sign the compact. Aveda, promoted as all natural, is one that won’t. When the Sound Consumer editor asked Aveda’s corporate headquarters why the company has not signed on, a representative replied “because Aveda has higher standards.” According to Skin Deep, Aveda has four products that fall under the category of high concern.

The term “natural” has a very loose definition. While an ingredient may be derived from something natural, the end product can be significantly altered from its natural state. It is not the indicator of purity we envision.

How to choose body care products?
The bottom line is if you wouldn’t eat it, you probably shouldn’t be putting it on your skin. Our skin absorbs that well. Another common route of absorption is our lungs. Some of the chemicals found in hair and nail treatments are absorbed in this way.

While this is a start, harmful components cannot always be identified. Marisa Walker of the Campaign for Safe Cosmetics says, “The term ‘fragrance’ often contains phthalates. Manufacturers don’t have to list fragrance ingredients. This is a common loophole used by the industry to avoid listing harmful chemicals.”

Walker goes on to say, “Phthalates also can leach into products from their plastic containers. 1-4 dioxane [“Reasonably anticipated to be a human carcinogen” according to the U.S. National Toxicology Program’s 11th Report on Carcinogens] is a contaminant that sometimes arises during the manufacturing process and as a result is not listed on the label.” You can get updates on situations like this by occasionally checking the Skin Deep and Campaign for Safe Cosmetics Web sites.

Other ingredients to avoid are parabens (e.g. methylparabens, propylparabens), widely used as preservatives in the cosmetics industry and known to mimic estrogen. They have been found in cells of breast cancer, a type of cancer that often is estrogen-sensitive. A study conducted at the University of Reading and published in the “Journal of Applied Toxicology” (January 2007) found several types of parabens were able to stimulate breast cancer cell growth.

What else can I do?
Go to the Skin Deep Web site and find out how the products in your bathroom rate for safety. You’ll be glad to know that nearly all the company product lines sold at PCC have signed on to the campaign, including Alba, Aubrey, Avalon, Burt’s Bees, Ecco Bella, Jason, Kiss My Face, Larenim and Zia. PCC’s body care merchandiser believes some others, such as Alaffia (which has not yet signed on), already are in compliance with the campaign standards.

Read labels. There are companies that sell products labeled “EU Cosmetics Compliant” and “paraben free.” These are easier to find at places such as PCC, which has endorsed the compact for safe body care products.

PCC already has begun the process of screening each and every body care and cosmetic product to ensure none fall in the “red” (high-risk) zone. PCC believes it will be able to ensure compliance sooner than the three-year timeline of the campaign.

This is great news for consumers. At last, they’ll know there’s one retailer that will provide body care products — shampoo, toothpaste, deodorant, makeup, soap and lotions — that will meet the most stringent standards.

Samia McCully is a naturopathic physician who graduated from Bastyr University in 2004. She works in private practice in the San Francisco Bay area. For more information visit wellnessarchitecture.com.

Notes from the Cellar: Dirt matters

Detox: what we know and what we can do