This article was originally published in January 2007 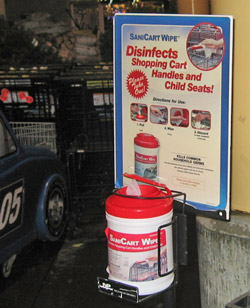 (January 2007) — Occasionally PCC is asked by members or other shoppers to provide antimicrobial wipes for shopping cart handles and/or for cashiers who touch both money and food. So we looked into this by consulting with experts and collecting information to shape our decision. What we found may surprise you.

First, we called the U.S. Centers for Disease Control (CDC). The CDC’s lead microbiologist in epidemiology, Dr. Matthew Arduino, told me flat out. “There’s little data to suggest shopping cart handles are a problem,” and he wondered why we would be concerned about it.

He said that simple hand washing and keeping fingers out of our eyes, nose and mouth are the best measures for anyone wanting to protect their health. Rinsing produce, grains and even meat before cooking is a good health measure as well.

The most threatening germs, it turns out, are most likely to be found in home kitchens. The Washington Toxics Coalition reports that kitchens often harbor more nasty germs than bathrooms! Cross-contamination from cutting boards, towels, utensils and kitchen sponges that aren’t changed often enough are common culprits.

Experts agree there also are questions about the effectiveness of hand wipes and sanitizers. The CDC says most wipes have been tested for bacteria, but few carry claims against viruses that shoppers are likely to be concerned about, such as rhinovirus, influenza or Hepatitis. The distinction is important because most common illnesses are caused by viruses and antibacterial ingredients will not kill them.

The CDC speculates that some wipes might possibly work on flu (alcohol wipes might be an option), but to be effective the alcohol concentration has to be at least 60 percent. The Toxics Coalition adds that all antimicrobials also require a certain contact time to be effective. Even chlorine bleach requires 30 minutes of contact time to kill bacteria and isn’t effective if the surface is dirty; it must be cleaned before bleach is applied.

Some antimicrobial products pose their own health concerns, especially if they contain triclosan, phenylphenols or glutaraldehyde. Most soaps and products advertising germ-killing prowess contain triclosan — which kills bacteria but not viruses.

Triclosan is a suspected endocrine disruptor and structurally similar to the most toxic form of dioxin. It’s nonetheless found in antibacterial products such as liquid soaps, deodorants, dish detergents, cosmetics and certain Colgate toothpastes.

Do we really need antimicrobial wipes in the first place? It’s a fantasy to think we can have germ-free environments and, while some germs indeed cause some nasty diseases, most of the microbes around us are harmless and even helpful.

Microbes in soil promote plant health, and without beneficial bacteria in our gut, our blood wouldn’t clot when we’re cut and bleeding. Without bacteria, we wouldn’t have wine, yogurt, blue cheese, soy sauce or sourdough bread.

As Dr. Stuart Levy of Tufts University puts it, we don’t need to be at war with the microbial world. Exposure to some bacteria encourages a stronger immune system, and some studies reportedly show an increase in allergies and asthma in people from overly sterile environments.

Many public health professionals argue that an excessive fear of germs has led to overuse of antimicrobials and germ-killing products, which is fueling the creation of antibiotic-resistant germs. Resistance to triclosan already is evident.

A study of 238 healthy households found that those using antibacterial products for cleaning, laundry and hand washing don’t have any reduced risk for illness or disease than households that don’t use such products.

The worst scenario is for consumers to use antimicrobials when they aren’t really helpful and encourage a false sense of security. In addition to washing your hands with warm water and soap before handling food, the best protections will involve washing all foods thoroughly before preparation, cooking meat and eggs thoroughly, thawing frozen meats in the fridge, and refrigerating all foods within two hours of cooking.

All cutting boards, dishes and knives that touch raw meats or eggs also should be washed in hot, soapy water before using with other foods that won’t be cooked. Towels and sponges should be changed often. These all are measures that PCC already wisely advocates and practices.

Talk to the board, Board meeting report, Application deadline closes, and more