This article was originally published in September 2006 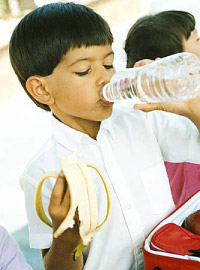 (September 2006) — Choosing healthy foods to pack in your kid’s lunchbox apparently isn’t all you need to consider in providing a healthy lunch. A study by the Center for Environmental Health (CEH) has found many popular soft vinyl lunchboxes contain high levels of lead.

Lead is known to be harmful to children, even in miniscule amounts. It can impair brain development and cause behavioral and developmental problems, including learning deficits and reduced IQ.

Lead already is banned from gasoline, paint and other products. But it still is added to soft vinyl plastic (PVC) as a stabilizing agent or pigment.

Some, but not all lunchboxes under these brand names test high for lead. For more information, visit www.cehca.org/lunchboxes.htm.

CEH says, “In most cases, the highest lead levels were found in the lining of lunchboxes, where lead can come into direct contact with food. Children may be exposed to lead from these lunchboxes when they eat food that was been stored in them. Handling the lunchboxes just before eating also could be an exposure risk.”

In California, CEH has filed lawsuits against manufacturers and retailers of the lunchboxes containing levels of lead that exceed state law. Defendents reportedly include Toys “R” Us, DC Comics, Walgreens and Warner Brothers; the lunchboxes feature popular children’s characters such as Superman, Tweety Bird, Powerpuff Girls and Hamtaro.

No deadline for the ban in Washington is set, but the WSDOE has sent letters to manufacturers or retailers asking them to certify their products don’t contain high levels of lead.

CEH says it tested only soft plastic lunchboxes and most did not contain lead. But because it’s not possible to tell by appearance which ones do, CEH is advising parents to avoid vinyl lunchboxes altogether.

Parents also can test vinyl lunchboxes using a hand-held lead testing kit available at most hardware stores. CEH says it doesn’t know at this time whether lead may be in hard plastic or metal boxes, but its investigation is continuing.

Letters to the editor, September 2006

Water bottle choices; Packaging and plastic; Biofuels, land use and farmers; and more

In praise of the wild mushroom