by Natalie Reitman-White and Bob Doppelt

This article was originally published in July 2006 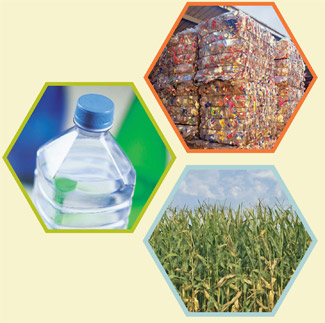 This article has been updated in a 2016 article here.

(July 2006) — One of the most common and persistent concerns raised by PCC members is the need to reduce packaging, especially plastic packaging. Sustainable solutions seem elusive, though new possibilities are emerging.

How can conscientious consumers support a market for sustainable products? How do we distinguish between real, long-term solutions and short-term fixes that appear attractive but fail in the long run to protect our environment and health?

One such conundrum involves the new biodegradable, plant-based plastics. Will these be the wave of the future? Informed consumers increasingly are concerned about the environmental and health risks of packaging — particularly the packaging of our food.

A throw away society
There’s no dispute that America has a throw away problem. According to the Environmental Protection Agency, municipal waste has increased more than 50 percent since 1980 to its 2003 level of 236 million tons per year. Of that total, 131 million tons of garbage go straight to the landfill, 33 million tons are incinerated — producing air pollution, and a scant 72 million tons are diverted into recycling or composting (including yard waste).

The average American throws away 4.5 pounds of garbage every day, of which only 1.4 pounds is recycled or composted. The biggest culprit is our excessive use of containers and packaging, which represent the largest portion of our garbage — 32 percent.

All this packaging contributes not only to the landfill but also consumes a huge amount of resources — including energy — to produce. Despite a growing amount of post-consumer content, most paper products are made from trees cut from our dwindling forests. Plastics take up 6 to 8 percent of the total oil and gas we use, a portion that will look more and more significant as we exhaust the world’s oil and gas supplies.

In addition to environmental concerns, food packaging raises health concerns. Many studies warn that potentially carcinogenic and hormone-disrupting chemicals in plastic food packaging can leach into food. Leaching increases when plastic comes in contact with oily or fatty foods, especially when heated, and from old or scratched plastic. Types of plastics shown to leach toxic chemicals are polycarbonate*, PVC** and styrene***.

Plant-based bioplastics
A growing number of environmentally concerned consumers are creating a hot market for new, bio-based products. Could these bio-plastics replace oil-based plastics? Major corporations and venture capitalists are banking on it.

NatureWorks LLC, a subsidiary of Cargill Dow, opened a new factory in Nebraska in 2001 and is generating more than 300 million pounds of corn-based plastic per year — using 40,000 bushels of Cargill corn each day in the process. This corn-derived polymer is sold to makers of soft-drink cups, salad and fruit containers, as fill in pillows and comforters, and even in donut boxes and gift card wraps. But is it really an environmentally friendly alternative?

Compostability and recycling issues
Advocates highlight that corn-based plastics are 100 percent biodegradable — as long as they’re in a controlled environment with at least 140 degree temperatures and 90 percent humidity for 40 to 60 days. Given those conditions, they degrade into carbon, hydrogen and oxygen.

Unfortunately, most consumers don’t have access to the kind of industrial composting facilities needed to create these conditions. One composting specialist says few people know that corn-based plastic requires very specific conditions to break down; it will not degrade in backyard compost nor will it degrade more quickly than other plastics in a landfill.

Another common misperception is that corn-based plastic can go into residential recycling bins with other plastics. This is not true. There currently is not a large enough market to recycle this type of plastic.

Some professional recyclers express concern that PLA can contaminate the #1 plastic recycling stream because it’s indistinguishable from other clear plastics and may be mixed in mistakenly. Others think recycling is unlikely to be affected adversely until PLA makes up a far greater percentage of the plastic stream.

GE corn is perhaps the most petroleum intensive crop except for cotton.

Petroleum is used to power machines in cultivation and harvest, to make synthetic fertilizers and pesticides, to transport corn for manufacture into bioplastic, and to shred and heat the bio-plastic for composting.

GE corn kills the larvae of beneficial pollinators, including the Monarch butterfly, and other beneficial insects. It fails, for example, to kill the African Cotton Worm, but kills the beneficial Green Lacewing that eats Cotton Worms.

GE issues
Even if consumers can get their corn-based plastic to a composting facility, many eco- and health-conscious consumers still are critical of the raw material used to create the product. At least 46 percent of the U.S. corn crop is genetically engineered (GE), and using GE-corn for plastic builds a market and provides justification to expand GE acreage.

GE corn is so widespread that many companies, such as Patagonia and PCC, have chosen not to use corn-based plastics until a non-GE source of raw material can be guaranteed. Others have opted for the Source-Offset program offered by NatureWorks, whereby, for every pound of NatureWorks PLA delivered, a corresponding amount of non-GE field corn is purchased.

Theoretically, NatureWorks PLA could be made from other high-sugar crops such as sugar beets (also genetically engineered) or yucca. But the only economically viable raw material today is corn.

Why not GE corn plastic?
A society wanting sustainable solutions needs to avoid quick fixes that aren’t sustainable and ultimately make things worse. From a systems perspective, GE corn plastic is a classic case of a “fix that fails” and “shifting the burden” dynamics.

Planting GE-corn for plastic instead of food nonetheless expands GE traits across the landscape. Expansion is certain to have negative economic, social and environmental consequences for PCC and many others.

Crop diversity slowly but surely will be reduced, putting the entire food system at risk. Large industrial ag corporations will exert even greater control over production and distribution, which increasingly will threaten small farmers and organic food production. This will lead to increased prices because there’ll be fewer suppliers controlling the market. In short, use of the product now may help in the short run but harm PCC’s business in the future.

While GE corn plastic might seem to make sense in the short term, its many negative consequences could make it harder or even impossible ever to return to sustainable solutions.

Bottom line: it’s no solution to replace one problem with another. Better to avoid GE bioplastics now and encourage better choices that won’t harm people, the economy and the environment for a long time into the future. With this type of issue, “slower is faster and faster is slower.”

Consumer choices
There aren’t perfect solutions, short of buying foods only in their whole, natural form. Given the culture we live in, we inevitably purchase packaged and throwaway items. Yet, as non-renewable resources dwindle and technology advances, new possibilities are emerging.

PCC merchandisers have considered several novel ideas for containers and packaging with an eye toward more sustainable options. They’re looking at containers made from palm fiber, a waste product of the palm oil process, new “food films” from non-GE eucalyptus pulp as an alternative to plastic wrap, and bioplates from areca leaf. All are recyclable, biodegradable and can compost in your own backyard.

In the meantime, for shoppers who buy throwaway products, PCC offers bioplastic utensils made from non-GE corn and paper products made from 100 percent recycled paper and no chlorine. When reviewing new items, merchandisers give preference to products with less packaging and coach manufacturers to reduce their packaging when they have a great product. (“Do we really need crackers in a tray inside a bag inside a box?”)

The old maxim — “Reduce, reuse, recycle” — still holds. Yet recycling and reusing a product really starts with buying products that can be re-used. This is called “precycling.”

After all, when we throw something away, there is no away. To be a sustainable retailer, we as consumers need to make sustainable choices.

Natalie Reitman-White is a Ph.D. candidate working with Resource Innovations, a research collaboration with the University of Oregon’s Institute for a Sustainable Environment. Bob Doppelt, Ph.D., is director of Resource Innovations, whose mission is to help government, business and communities adopt sustainability thinking, policies and programs.

Horizon vs. Organic Valley, Pasteurized vs. ultra-pasteurized, Plastic lining in cans, and more