An update to our report in April 2005: Ocean aquaculture

This article was originally published in June 2006 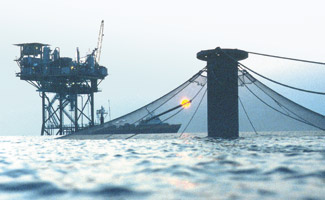 (June 2006) — The oceans lapping on our shores are more vast and wild than our country’s prairie and our last and greatest public asset. Legislation to open our oceans to polluting, private industry is being promoted by speculators, corporate investors and bureaucrats who envision factory feedlots three to 200 miles offshore. Locally, the Strait of Juan de Fuca is a target zone for caged fish production.

Just as family farms on land are being displaced, small independent fishing businesses cannot survive if the bad practices of industrial food production are replicated in our marine environment.

The hazards are the same: degradation of natural resources, introduction of genetically engineered and invasive species, concentration of ownership, subsidies providing unfair market advantage, pollution, amplification of diseases and parasites, usage of antibiotics, pesticides and other chemicals.

Despite these well-known risks, Senate Bill 1195, “The National Offshore Aquaculture Act,” was introduced last June by U.S. Sens Daniel Inouye and Ted Stevens, at the request of the current administration. It gives the National Oceanic and Atmospheric Administration (NOAA), within the Department of Commerce, broad regulatory power to promote and manage industrial fish farming, with little or no oversight from the public, states or fishery management councils.

S. 1195 grants the Secretary of Commerce nearly complete discretion to fast-track permitting and long-term leasing of commercial fish farms. It does not mandate any mitigation of harm on wild fish, endangered species, other marine life, water quality or habitat. There are no provisions to protect sensitive ecosystems or marine sanctuaries, or to monitor escaped fish. No bonds or royalties are required to use or pollute public waters. Industrial aquaculture also would be allowed on and within one mile of oil and gas rigs.

Before offering this legislation, the Department of Commerce/NOAA neglected to assess impacts from industrial fish farming on ocean ecosystems, wild fish and resources, human health, coastal economies and fisheries-dependent businesses. A legislative environmental impact statement (LEIS) is required by law and would answer most concerns. Washington Reps. Jim McDermott and Jay Inslee, along with 14 other congressional members, called for an LEIS. NOAA has ignored their request.

S. 1195 would overturn decades of ocean management by allowing foreign-owned fishing activities back into our federally managed waters. Thirty years ago, foreign fleets harvested more than 70 percent of the fish from U.S. territorial waters: their lights could be seen from our beaches. In 1976, “The Magnuson Act” (named after Washington’s senior senator, Warren G. Magnuson) was passed, eliminating foreign fishing operations three to 200 miles offshore, which became known as our Exclusive Economic Zone (EEZ). 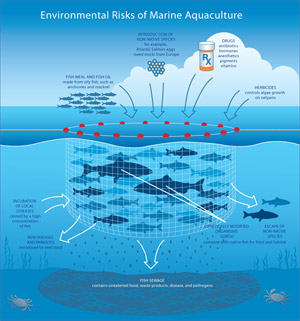 Under S. 1195, foreign operations again would have access to our ocean commons. Foreign corporations already enjoy greater rights under CAFTA and NAFTA than domestic companies and are able to bring claims against nations asserting their right to a “stable and predictable regulatory environment.”

If the United States later decides that offshore aquaculture poses too many risks and amends or revokes S. 1195, foreign investors would have the right to seek damages from the U.S. Treasury (U.S. taxpayers) for “indirect expropriation” of their investments.

“Besides, we know the natural system for fisheries in the Pacific Northwest is incredibly productive if managed carefully. Strip mining of oceans by huge boats to supply the offshore aquaculture industry is a major threat to that productivity.”

Ocean cage aquaculture
In the journal, “Issues in Science and Technology” (Spring 2006), Stanford’s Dr. Rosamond Naylor writes, “If the aquaculture industry does not shift to a sustainable path soon, the environmental damage produced by intensive crop and livestock production on land could be repeated in fish farming at sea.”

To contain costs, the fish farm industry has resisted using closed containment systems, so antibiotics, fungicides, pesticides, anti-foulants and other chemicals flush directly into the marine environment. Scientists calculate that NOAA’s plan to expand fish farming fivefold would allow the annual discharge of nitrogen equivalent to the untreated sewage of 17 million people.

Finfish cages already have proven notoriously incapable of confining farmed fish. More than 613,000 nonnative salmon escaped into Puget Sound from net pens over a four-year period. Despite the abysmal record, a bill was introduced to the Washington state legislature (S. 5787) to “streamline” the regulatory process and allow 50 black cod farms in the Strait of Juan de Fuca.

Ignoring codes of conduct
As industrial, corporate-owned food systems expand, codes and protocols have been developed to protect traditional businesses and activities. A guiding principle of the U.N. Food and Agriculture Organization (FAO)’s “Code of Conduct for Responsible Fisheries” is that “aquaculture development does not negatively affect access to fishing grounds or livelihoods of local communities.”

The United States is on the record as a signatory and strong supporter.

In 2002, the National Marine Fisheries Service (within Commerce/NOAA) released its own “Code of Conduct for Aquaculture Development in the U.S. Exclusive Economic Zone,” stating that the United States adheres to the spirit and intent of the FAO Code and that “aquaculture development in the EEZ will adopt the guiding principle of a precautionary approach.” It also says “it is necessary to address potential economic and social impacts on local communities … and their participation [is] sought in any decision-making process.”

Senate Bill 1195 ignores NOAA’s own code as well as the FAO code.

Aquaculture alchemy?
From the pages of children’s stories to glossy government reports, the lure of turning dross into riches holds magical sway. A Brothers Grimm fairy tale, Rumpelstikltskin, describes a miller who recklessly bragged to the greedy king that his daughter could spin straw into gold. She was locked in a palace room where a wizard who spun golden threads appeared. She promised him her first-born child, hoping payment never would come due.

With similar hubris, proponents of ocean fish farming boast they can transform inexpensive, raw materials into high value seafoods, creating wealth for those who control the process.

Mollusks and plant-eating fish can be farmed sustainably, creating a net gain of protein. But the fish proposed for ocean pens are carnivorous species. To meet their needs, oceans are scoured for mackerel, herring, and other tiny fish that are macerated and made into feed.

Thirty-million metric tons of small fish — one third of the ocean harvest — are taken annually from coastlines of developing nations. These small fish are essential components of the ocean food chain and meet the subsistence needs of people in poorer regions of the world. When turned into fodder for fish in cages, two-thirds or more of their protein value is lost.

Scientists, conservationists and even feed manufacturers warn that ocean exploitation has a limit. As in the tale of Rumpelstiltskin, aquaculture alchemists boast that creation of wealth can be nearly magical, but the costs will be passed on to future generations.

Even Sen. Ted Stevens, one of the primary sponsors of S. 1195, offered an amendment so governors could opt out of having fish farms in federal waters adjoining their state. He noted, “I myself doubt seriously that we ever would be able to protect wild fish if we had aquaculture off our shores.”

Another ocean advocate, Jean-Michel Cousteau, said in describing industrial aquaculture, “Many fishermen are the victims. I am on the side of the fishermen. I do not want them to lose their jobs.”

The rush to turn our oceans into corrals and wild fish into factory animals is a “get rich quick” scheme for early players in the game. The true costs are not paid by those who profit, and Nature has a way of making humans look not just foolish but foolhardy — especially those who spin untruths and jeopardize our environment and shared resources.

Several coastal states have passed resolutions opposing production of genetically engineered fish and ocean aquaculture. Yet in Washington state, proponents are working quietly to allow farms off our shores.

U.S. Sen. Maria Cantwell is on the Department of Commerce’s Ocean Policy Study Subcommittee, and Washington state Sen. Ken Jacobsen is chair of the Natural Resources, Ocean and Recreation Committee in Olympia. Both should be reminded that instead of promoting short-term gain for a few, we have an obligation to future generations to protect our oceans, our last and greatest public asset.

Anne Mosness was captain of salmon fishing boats in Alaska and Washington for more than 20 years. She directs the “Go Wild” Campaign and is a consultant on marine and fisheries issues.