Microwaved food: is it healthy?

This article was originally published in January 2006 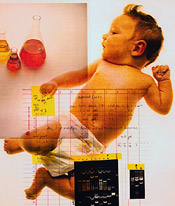 (January 2006) — For convenience, few kitchen tools can compare to the microwave oven. An estimated 90 percent of American households have one and most of us have used a microwave to reheat leftovers.

From time to time, we at PCC get calls from individuals asking if microwave ovens affect the nutritional value of food. The answer is that there’s much we do not know, but the research we have raises concern.

Microwave ovens were invented by German scientists during World War II to support ground troops or those in submarines. After the war, in 1952, the Raytheon company sold the first U.S. microwave oven.

Since then, the technology has spread around the world, apparently with scant or virtually no research by regulators into possible harmful effects. It wasn’t until 1975 that the Journal of Food Science first cast doubt on the safety of microwaved food. Studies with microwaved broccoli and carrots revealed the molecular structures of nutrients were deformed to the point of destroying cell walls, while the cell structures stayed intact after conventional cooking. There have been few studies since.

Microwave ovens work by using a form of radiation — waves of electrical and magnetic energy — to make molecules in the food vibrate and move, producing heat.

The U.S. Food and Drug Administration (FDA) has regulated the manufacture of microwave ovens since 1971 and has authority over food safety. But a review of 200 references on its Web site reflects more attention to potential radiation leakage than the effects of eating microwaved foods. The only reference to food quality that I found says, “foods cooked in a microwave oven may keep more of their vitamins and minerals because microwave ovens can cook more quickly and without adding water.”

In 1992, a team of Stanford University researchers reported in the journal Pediatrics that re-heating human breast milk in a microwave even at low settings can destroy lysozyme, a compound that fights bacterial infections.

Japanese research reported in Science News in 1998 said microwaving destroys vitamin B-12. Six minutes of microwave cooking destroyed half the B-12 in meat and dairy, a much higher rate than from conventional cooking.

In 1989, the Lancet medical journal reported that heating baby formula in a microwave changed its chemistry. Dr. Lita Lee found that microwaving converts some trans-amino acids into synthetic substances similar to unhealthy trans-fatty acids; one amino acid, L-proline, reportedly converted to a substance that’s reputed to be toxic to the nervous system and kidneys.

Russian research reported by The Journal of Natural Sciences in 1998 found that people who ate microwaved food had a statistically higher incidence of stomach and intestinal cancers, digestive disorders, and lymphatic malfunctions causing degeneration of the immune system.

Microwaving milk and cereal grains and plants such as root vegetables reportedly created cancer-causing agents. The Russians found that thawing frozen fruits or microwaving vegetables, raw or cooked — even briefly — caused chemical alterations. Microwaving reduced availability of vitamins B, C, E and essential minerals in all foods tested, and destroyed the nutritional value of nucleoproteins in meats.

Yet the most compelling concerns come from a study in 1989 by Swiss food scientist Dr. Hans Hertel. Eight volunteers from the Macrobiotic Institute at Kientel ate raw, conventionally cooked and microwaved food at regular intervals.

Significant changes were seen in their blood samples after eating microwaved food, including reduced hemoglobin and cholesterol values, especially the ratio of good vs. bad cholesterol. White blood cells for immune function showed a distinct short-term decrease. Hertel also found irregularities in the structure of the microwaved food — the creation of new compounds called “radiolytic” compounds that are unknown in nature.

Clearly there’s a need for more research, but regulators seem more interested in what happens if a microwave oven door malfunctions than the impact of eating microwaved food. As a consumer, I’ll choose to cook the old-fashioned way.

Author’s note (March 2006): The Nutrition Action Newsletter alleged in April 2005 that two of the seven studies cited above were not peer-reviewed or published (not necessarily a contradiction of findings) and that one food scientist says too much water was used to microwave broccoli excessively in another study.

Yet research at Stanford University and research published by the Lancet, Pediatrics, and the Journal of Natural Sciences was not addressed.

What concerns me most as a consumer is the U.S. Food and Drug Administration’s (FDA) failure to review any of the research conducted on microwaved food in the past 38 years.

A radiation expert at the FDA’s Center for Food Safety and Applied Nutrition told me the FDA decided in 1968 that microwaved food was safe. He said the FDA has not ever conducted any research of its own and no, the FDA wasn’t aware of and has not reviewed any of the studies cited.

“It hasn’t been on the agenda to review the literature,” he said. From a consumer’s perspective, the “don’t look, don’t find” position highlights the need for more research.

The FDA’s response took months to obtain, following several unanswered email and phone queries, and was not received in time for the above article.

Insights by Goldie: Still mindful of eating for a small planet

Letters to the editor, January 2006