This article was originally published in August 2005 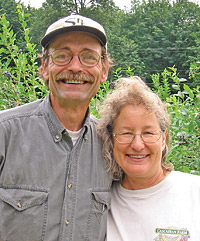 (August 2005) — I can’t imagine one summer going by without enjoying an abundance of sweet, delectable blueberries. One seductive berry after another on a sunny August afternoon, and before you know it, the entire pint is gone. This is heaven.

And the best thing for me about PCC in the middle of summer is the luscious showcase of fresh, organic blueberries in the produce aisle. When you purchase these juicy local treasures with the label “Many Hands,” you’re doing more than indulging in a dose of healthy antioxidants. Money spent on the berries circulates throughout our local economy, helping sustain the farm, the farmworkers and the environment in the most delicious way.

These incredible blue delights come from Cascadian Home Farm, managed and farmed by Jim Meyer and his wife Harlyn, who is in charge of marketing, sales and special projects. To get to the farm, follow Highway 20 east as it twists along the scenic Skagit River through evergreen trees and luxurious greenery. Just about three miles past Rockport the vista opens to a breathtaking view.

The Cascadian Home Farm Roadside Stand is on the left side of the highway and the Skagit River seems perilously close to the highway on the right side. In a unique growing environment, the high bush blueberries grow on 11 of the farm’s 28 certified organic acres near the Roadside Stand.

On a beautiful Northwest overcast day, I met Jim at the farm stand and followed him out to the blueberry crop. Jim has been farming organically for 33 years. He and Harlyn have been the managers of this farm since moving from Colorado to the Northwest in 1993. Later, they were able to purchase part of the land that the farm operates on.

The blueberries were planted in l990 and were already in place by the time Jim arrived and took over as farm manager. Five types of blueberries are grown — Spartan, Toro, Patriots, Blue Crop and Jersey — each ripening at a different time, and all sold through PCC stores. The Farm Stand is open May through October. Blueberry season starts in late July and continues for at least six weeks. 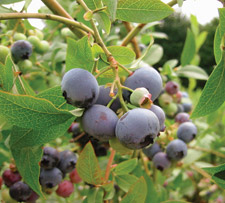 Blueberries don’t ripen all at once — requiring several picks.

The rows of blueberry bushes are amazingly perfect, not a weed in sight and heavily laden with succulent berries. In the spring, Jim rents bee hives from a local apiary in Mt. Vernon to help pollinate the crops. “There are also a lot of native mason and bumble bees that help with pollination,” Jim said.

Well-trimmed grass grows between each row and a layer of compost, topped with a layer of sawdust covers every row under each blueberry bush. The compost is made from grass clippings gathered from the farm and sawdust from a local mill.

“Blueberry bushes take three to five years to produce and can keep producing for 50 years.” Jim swept his hand over the horizon and added, “We’re an island in a sea of naturally occurring vegetation. There are bugs that want to eat bugs. It’s a constant interchange of who wants to eat whom. With pesticides, you upset that balance, and what I really rely on is balance.”

The strong, well-established blueberries aren’t very susceptible to many insects and diseases. “A late freeze theoretically could destroy all the flower buds resulting in no crop, but the reality is probably a reduced crop, which can happen because of weather or disease, which is also weather dependent,” Jim told me.

Blueberries prefer bogs and since they need lots of water, they’re susceptible to a fungus called mummy berry. The thick mulch of compost and sawdust helps keep the mummy berry problem under control. Since weeds can be a problem, the rows are hand-weeded and the grass between the rows is mowed to help keep any weeds from migrating.

Maintaining the fields, harvesting the berries, sorting and packaging takes so many hours, it truly takes “many hands” to make it work. At Cascadian Home Farm, there are two year-round, full-time farmworkers. By mid-season the workforce swells to about 45. The berries are handpicked and sorted. Most of the berries on the farm are sold as fresh fruit. Many of the same seasonal farmworkers return to the farm year after year.

In Skagit County there is a relatively stable farmworker population. These workers move from harvesting bulbs to cucumbers to berries, then on to potatoes and apples. In Washington, farmworkers earn a minimum wage of $7.35 an hour, compared to the federal standard of $5.15 an hour. Jim pays his workers a minimum of $8 an hour, with many earning $10 to $15 an hour depending on skill and the difficulty of the harvest.

Our food choices reflect our values and our purchases can help support livelihoods, farmland and the environment. One of the best ways to help change the agricultural system is to value the food we eat and spend our money in a way that allows our neighbors to make a decent living. When it comes to blueberries, I can’t think of a sweeter way to spend my money.

Editor’s note: Jim and Harlyn’s Cascadian Home Farm is the original farm where the now-national brand, Cascadian Farms, was started.

Board report, Next board meeting, Nominating committee looking for candidates, and more

Water consumption in most adults is below where it should be. With mild dehydration common, we look into why you should drink more water.