News from the farms

This article was originally published in July 2005

Report from the Delta Farm

Last month, Nash and his crew celebrated 25 years of organic farming by holding a barn dance. As part of the celebration, a huge potluck was held and afterwards everyone danced to the Del Rays — a fusion of bluegrass and folk music. 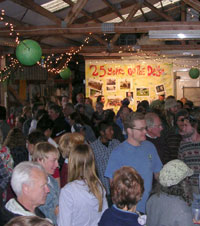 As I approached the farm, driving from Seattle that evening, I could see a field of automobiles and more lining up both sides of East Anderson Road. I think that everyone from Clallum, Jefferson and Mason counties who know about Nash and Dungeness Organic Produce were there. More than 300 people attended, reinforcing how valuable the farm, the crew and locally grown produce are to the community.

Now that the Bennington Place is certified organic, Joel Huesby’s operation, Thundering Hooves, may market and sell organic beef. Among other challenges, this exposes his farming neighbors to relatively unorthodox farming methods in Walla Walla County.

So, Joel became proactive and sent a letter to his neighbors explaining his beliefs about organic farming and the financial gain he hopes the organic beef business will provide. As usual, Joel is pioneering a new way of thinking in this region. Here is the letter Joel sent to 11 of his neighbors:

Dear neighbor,
I’m sending along information from the Washington State Department of Agriculture regarding pesticide drift and organic farming. I thought it would be best to preface that information with our own.

We decided to become certified organic for several reasons. As direct marketers, we began by asking the questions, “Who is my customer? And, what do they want?” Within agriculture, organic is the fastest growing segment today, growing about 20 percent annually. Within organic agriculture, organic livestock production is the fastest-growing segment as well. Organic products fetch something between 20 to 60 percent more than non-organic agriculture products.

You may or may not believe that the benefits (and associated price premiums) from products grown organically are justified. Nonetheless, we have found a significant and growing percentage of the population purchase organic for a variety of reasons. And remember, “The customer is always right.” We believe that this is a trend and not a fad.

We use different tools. While you may use pesticides, we use mowing, grazing management, perennial cover and resistant species to manage pests. Organic agriculture is quite productive. We still get hay yields of eight tons per acre without fertilizers or herbicides, but we may harvest it with cattle and market the meat rather than by baler and market the hay.

Organic farming is not necessarily new-age or “liberal.” At its heart, it’s conservative in nature. As the only truly “conventional” method, it has provided for all of civilization’s needs since nomadic herdsmen first settled in one area and began growing crops thousands of years ago to the 1940s.

A buffer zone is required as part of our plan. We purposely built our fence inside our property line. This accomplishes two things for us. Cattle can clean the weeds and growth under the fences, eliminating the need for Roundup®, but also they cannot reach farther and graze your conventional farmland.

As a neighbor, we respect your private property rights. Please respect ours. We recognize that we live in community and look forward to “talking over the fence” and hear about how you are doing.

The PCC Farmland Fund works to secure and preserve threatened farmland in Washington State and move it into organic production. The fund is a nonprofit 501(c)3 organization that is separate from PCC Natural Markets and exists by independent donations from contributors. For more information, see the PCC Farmland Fund Web pages. You may also contact the Fund at 206-547-9855 or email farmlandtrust@pccmarkets.com

Board thanks members and candidates, Board meeting report, 2005 election results

Cherries from George and Apple Otte