This article was originally published in October 2004 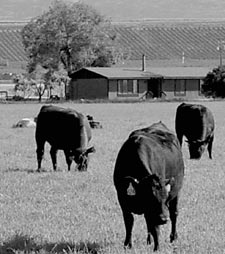 Grass-fed cows home on the range at Williamson Farms in George, Washington.

(October 2004) — Here’s a pop quiz: what foods are considered a good source of essential omega-3 fatty acids? Most savvy shoppers would name salmon and flax oil. But there’s another good source that may surprise you — grass-fed beef. And, that’s just one of the many benefits of grass-fed beef — for the health of consumers as well as cows and the environment as a whole.

Grazing on grass is, of course, what nature intended for cows, and now a growing number of ranchers are returning to this truly natural way to raise beef. Instead of confining cattle in the final months to feedlots for fattening them on grain (“finishing”), ranchers are keeping their cattle home on the range to eat nothing but green grass.

One such rancher is Jerry Williamson of Williamson Farms in George, Washington. Starting this month, his grass-fed beef will be in four PCC stores. PCC Director of Merchandising Paul Schmidt says he’s offering the Williamson Farms beef at the Greenlake, Fremont, Issaquah and Kirkland stores on a trial basis to see how consumers respond. Shoppers will see a full range of cuts from hamburger, steaks and roasts, to soup bones.

Grass-fed beef tastes different from grain-finished beef, reflecting the flavor or “terroir” of the soil, water and grass on which it’s grown. It has about one-fourth as much fat, so it cooks faster. Old-timers say it has a real “natural” beef flavor, like homegrown beef from their youth.

Beyond the different flavor profile, the health benefits are significant. Grass contains about 60 percent omega-3 fatty acids and, when cows eat grass, these healthful fats accumulate in their bodies. Research shows a grass-fed beef steak has two to six times more omega-3 essential fatty acids than a steak from a grain-fed cow.

When people eat the meat, they get the omega-3s.1 Omega-3s are called essential fatty acids because the human body requires them but cannot convert them from other oil or fat forms. They’re known to lower the risk of numerous diseases including heart disease, diabetes, cancer, depression and other mental illness.

Grass-fed beef tastes different from grain-finished beef, reflecting the flavor or “terroir” of the soil, water and grass on which it’s grown.

Studies show grass-fed beef contains twice as much beta-carotene as grain-fed beef, has more vitamin E, and is lower in calories and saturated fat. Researchers also recently found grass-fed products to be the richest known source of one of the most potent cancer fighters — conjugated linoleic acid, or CLA — another “good fat.” Studies published by the journal, Cancer Research, show that animals fed even very small amounts of CLA (less than 2 percent of total calories) reduced tumor growth by 60 percent.

The cows also benefit from a pure grass diet. Cows aren’t made to eat grain. When they’re forced to, their stomachs become unnaturally acidic, causing a range of disorders called acidosis. The cows literally may become sick to their stomachs.

An acidic stomach is also a breeding ground for E.Coli bacteria. Researchers at Cornell University found that grain-fed cows have about 300 times more E.Coli in their guts than grass-fed beef. While an acidic environment causes some bacteria to die off, resistant strains thrive and multiply. When people eat grain-fed beef, the dangerous E.Coli is more likely to stick in the human gut and make people sick.

Finally, the environment is in balance when cows are allowed to graze naturally. Cattle at pasture leave manure scattered around as an excellent natural fertilizer, recycling back to the land what they’ve taken. Feedlots, in contrast, can pollute the land and groundwater with concentrated runoff.

Raising cows on grass also might help reduce greenhouse gases. Dr. Rita Schenck from the Institute of Environmental Research and Education on Vashon Island says land kept in pasture may have as many as 150 different species of grasses. When the grasses grow, they draw carbon dioxide from the air and sequester it in the soil. She calculates that a grass-based farm may help us maintain cleaner air and a healthier environment.