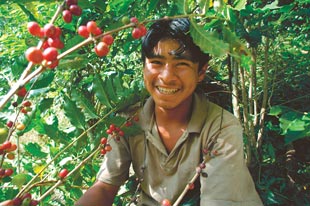 A Mexican coffee farmer in his element among the lush, shade-grown environs of a Fair Trade coffee cooperative.

(October 2004) — When you buy coffee at PCC, you’re doing more than just buying some delicious organic java. You’re helping to train doctors and nurses in Mexico, fund reforestation programs in Costa Rica and build new schools in Peru. PCC’s coffee is all certified Fair Trade. And Fair Trade is bringing in similar stories of hope from around the world.

TransfairUSA is the certifying agency for Fair Trade, a term that applies only to imported products. It says more than 600,000 producers (including farmers, farm workers and tea pickers) and their families in more than 32 countries benefit from selling their coffee, tea and cocoa through Fair Trade programs. In 2003, Fair Trade sales in the U.S., Canada and Pacific Rim totaled $250.6 million, an increase of 37 percent over 2002.

In addition to coffee, tea and cocoa, Fair Trade products consist of a few produce items, chocolate, crafts, clothing, housewares and a wide variety of other products made by workers in developing countries. Fair Trade products are screened to ensure fair wages for workers, cooperative workplaces, environmental sustainability and respect for cultural identity.

“A bite of Fair Trade chocolate means a lot to farmers in the South,” says Kwabena Ohemeng-Tinyase, managing director of the Kuapa Kokoo cocoa cooperative in Ghana. “It opens the doors to development and gives children access to healthcare, education and a decent standard of living.”

Fair Trade is sometimes confused with “free trade,” but they are not the same. Free trade is the elimination of trade rules to allow free trade between countries. But with no rules and many disadvantages, poor people in developing countries often get left behind. Fair Trade groups work to redress this imbalance.

Fair Trade is a young and emerging field, with several trade groups offering support. There have been complaints that some U.S. businesses are making claims of “fair trade” in their marketing when they aren’t actually involved in Fair Trade practices. Also, a few businesses are capitalizing on Fair Trade sentiments by charging higher prices. PCC monitors its Fair Trade practices and relationships to make sure that producers and employees are getting paid fairly.

Fair Trade organizations differ from commercial importers in several ways. The focus of Fair Trade groups is to benefit the artisans they work with, not maximize profits. They do this in part by reducing the number of middlemen and minimizing overhead costs. They are encouraged to provide health care, childcare, access to loans and other benefits for their employees. Some Fair Trade groups also shift processing and packaging of products to the developing world.

Learn more about Fair Trade at:

“With Fair Trade we have an incentive to invest in social programs that benefit producers and the community,” adds Edinson Cabana Zapata, a co-op member of the ASOPROBAN banana cooperative in Colombia. “We also receive higher incomes to sustain ourselves. If it weren’t for Fair Trade, we wouldn’t exist as banana producers since the amount we receive for a box of conventional bananas does not cover our expenses.”

Without the intervention of Fair Trade, fruit farmers often receive just a few cents a pound for their crops — much less than the cost of production. TransfairUSA says that the cost of basic necessities for a family of four in Ecuador is $9.60 per day, but workers on non-Fair Trade farms may earn only $3 a day.

Fair Trade practices also focus on helping the environment by encouraging sustainable harvesting methods. For example, many Fair Trade cooperatives compost coffee pulp instead of dumping it into local waterways. Nearly all Fair Trade coffee is organic; the rest meets Integrated Pest Management (IPM) standards that emphasize alternatives to pesticide use. Some cooperatives invest in eco-friendly mills that greatly reduce the draw on resources.