This article was originally published in March 2004

(March 2004) — The Bennington Place bears the name of a long time resident family. One hundred and seventy-four acres of deep silt loam soil rise from the Oregon border southwest of Walla Walla to a high point looking east across the valley toward the Blue Mountains. The land is blessed with abundant groundwater, an intermittent pond for migratory waterfowl and a well-kept house and outbuildings.

After his father died in 2002, Bill Bennington decided that he would sell the farm. The Huesbys across the road were farmers with a new mission, and they’d been on their land for four generations. But they didn’t have enough ready money for the $300,000 down payment that Bill and his family needed. Interest and pressure from other farmer/investors put the land in jeopardy — their plans included developing view-lot ranchettes.

At that point the Huesbys called the Farmland Fund and the rest of the story rolls into the future. The Fund secured the land, the Huesbys now lease it with an option to buy, their lease payments will cover the Fund’s annual mortgage costs, and Bill will work with the Huesbys on the old place, still called by the Bennington name. 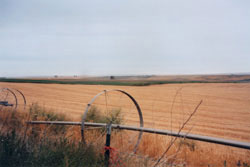 $35,000 challenge grant
The Fund’s next task is to raise $250,000 to repay the loan required for the down payment. The Phoebe Hass Charitable Trust provided $12,600 in time for closing. Now, longtime donor Leona Bronstein and the Quixote Foundation have stepped up to pledge a combined challenge grant of $35,000. Bronstein and the Quixote Foundation will match every dollar given to save the Bennington Place up to a total of $70,000. That will cover three quarters of what’s due on the loan in 2004. Bronstein, a retired nurse, says, “I’m just happy I can save little pieces of this Earth for future generations and for present generations to have nontoxic food, which is medicine.”

Special thanks to the non-profit Whit Press, for creating the anthology In Praise of Fertile Land to benefit the Farmland Fund. All proceeds from sales of this book in PCC stores will go to save the Bennington Place. Poetry saves farmland!

The Huesbys raise pasture-ranged and pasture-finished livestock and poultry in an open, natural and low-stress environment with no growth hormones or antibiotics, in transition to organic certification. The cattle eat only pasture grass and alfalfa. They’re never sent to a feedlot.

The Huesby fields look like domestic versions of Africa’s Serengeti Plains — animals move freely in their own groups, alert and curious, sharing the common grassland. The family calls its business Thundering Hooves; for their story, visit their Web site at www.thunderinghooves.net. 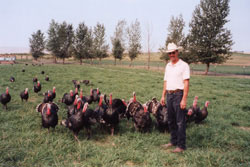 Joel Huesby with flock of Bronze heirloom turkeys. The Huesbys raise pasture-ranged and pasture-finished livestock and poultry in an open, natural and low-stress environment with no growth hormones or antibiotics, in transition to organic certification.

Parents Gordon and Lois, sons and daughters-in-law Joel and Cynthia, Bryan and Jenny and their children live on the farm. Sister and brother-in-law Clarice and Keith Swanson live in Seattle. The Huesbys are acknowledged leaders in humane and sustainable meat production. One of their neighbors says their local reputation is “through the roof.” Another said, “You’re doing it right.”

The Huesbys sell directly by contract and through farmers’ markets on both sides of the mountains, making weekly deliveries during their production season to Seattle-area individuals and families and to the Salish Lodge, Woodmark Hotel, Flying Fish Restaurant and Essential Baking Company, among others. They have purchased a local custom meats processing facility, Kwik Freez, and will soon open a storefront on East Isaacs in Walla Walla. Contact them at 866-350-9400 or by email at info@thunderinghooves.net.

Support on both sides of the mountains
Among the Farmland Fund’s project selection criteria is a requirement that land saved must be “near an active and supportive community able to provide supplies and equipment, processing, professional assistance, financial resources and markets.”

The people of the Walla Walla Valley have successfully negotiated a water rights controversy and found a cooperative way to accommodate both farmers and wildlife. They’ve invested in restoration of the town’s historic brick buildings, an attractive farmers market, cultural events and festivals. They value agriculture both as heritage from the past and as foundation for their future.

Seattle customer Jeff Fairhall, owner of Seattle’s Essential Baking Company, says: “As a consumer and business operator, I try to limit my purchases of meat to that from animals raised in a way that reflects the sacredness of all life. The Huesbys have been supplying our cafŽs with pasture-raised poultry for the past year.

“Sustainable agriculture advocate Fred Kirschenmann points out the obvious: ‘animals have feet and plants have roots.’ Bringing the animal to the food instead of the other way around makes more sense than ripping up the earth to grow plants to feed animals that are kept in cages.

“Confinement factories and feedlots, under our present system of economic insanity, merely provide ‘cheapness at any price,’ to borrow a phrase from Wendell Berry. The interests of Life are better served by a more sane and humane approach. I wholeheartedly endorse the Farmland Fund’s support of this alternative.”

With this project the Farmland Fund steps over to the east side of the Cascades, in affirmation of its statewide mission, and embraces an additional sector of agriculture. The Bennington Place satisfies all four of the Fund’s primary criteria: high-quality soil, a functioning landscape, a supportive rural community and opportunities for restoration of wildlife habitat.

Since its creation by PCC in late 1999, the nonprofit Farmland Fund has raised more than a million dollars and participated in protecting five farms. Two of them are owned by the Fund — the Delta Farm, along the Dungeness River on the Olympic Peninsula, and now the Bennington Place, between dryland hills in the Walla Walla Valley. The first lies on deep bottomland carried down from the mountains. The second rests on a thick layer of sediment from backup of the ancient Lake Missoula Floods.

One raises plants, the other animals. Both are in the hands of master farmers, with the next generation moving into the lead. Donors to the Fund have made this possible. Thank you for your support.

The Bennington Place — another farm saved

The Farmland Fund is an independent community-supported 501(c)3 non-profit land trust. Its work is made possible by direct contributions from more than 1,400 individuals, families, businesses and foundations.