This article was originally published in October 2002 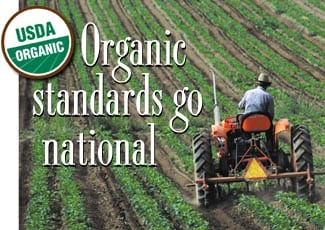 See also in this article:

We view the long-awaited official implementation of the USDA National Organic Standards on October 21 of this year as a significant milestone in a long journey.

PCC’s Board, management and staff take seriously our role as “gatekeepers” for all our members and other shoppers. That means we always have accepted the responsibility of providing you, the consumer, with organic products of the very highest standards, labeled truthfully.

We therefore view the long-awaited official implementation of the USDA National Organic Standards on October 21 of this year as a significant milestone in a long journey. 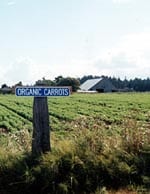 There may be some initial confusion experienced by consumers about what information new organic labels will and will not have, and how they’ll differ from previous labels about organic. The announcement of “new national organic standards” may puzzle many people who have understood that there have long been good systems and standards in place already to protect organic. They’re right; there have been generally good organic standards for years.

But there have been more than 40 separate standards programs, mostly set by private organizations and some by states, the most advanced of which have been those of Texas and Washington. Our state has had an exemplary organic program for many years, in part because of PCC’s active leadership.

Washington state Sen. Ken Jacobson, while serving on the PCC Board of Trustees, introduced the original bill to the Washington State Legislature in the 1980s. PCC staff and management were very instrumental in securing its passage. Later, I served seven years on the WSDA/Organic Advisory Board.

In the mid-’90s, an estimated 7,000 letters from PCC members to the government helped secure the strong national standards taking hold. Since my appointment to the National Organic Standards Board (NOSB) as a consumer representative in 2000, PCC has continued to pay my salary, permitting me to devote as much time as necessary to serve on the NOSB, which is an unpaid position. PCC has much to be proud of in the journey toward the first organic standards at a national level.

Changes in the labels
In the past, label readers have been reassured by statements such as “Organically grown and processed in accordance with the California Organic Foods Act …” yet even that widely used, familiar statement usually was based only on signed affidavits by the grower or company. Seldom was it followed by independent third party certification — which even many longtime organic consumers did not realize.

Meanwhile, many more labels have begun to reflect independent third party certification. A few of the more familiar certifier names appearing on many labels in PCC stores through the years have been WSDA/ State Organic Program; Oregon Tilth (or OTCO); Quality Assurance International (or QAI); and California Certified Organic Farmers (or CCOF).

These certifiers previously certified systems and products to their own separate standards, but now with national standards, they’ve all applied to and been accredited by the USDA as USDA certifiers. Now, they’ll act as agents of the USDA.

At this time, 54 certifiers are accredited by the USDA, with more applications pending. Some eventually will include various foreign agents accredited to certify products grown or processed outside the USA, to USDA standards.
Through it all, for the past decade, the phenomenal success of organics has been grounded on the confidence of consumers that the organic claims made on labels are truthful.

For that confidence to be maintained, independently certified, transparent standards for all phases of organic production, processing and handling are essential with a level playing field at the national level. This is especially so as organic increasingly becomes more corporate and mainstream (see Sound Consumer, September 2002, “The Changing Face of Organic Foods”).

The future
What a remarkable journey it’s been thus far! Organic producers over the past three decades have made exceptional progress in the struggle to move our nation’s chemically dependent agricultural production and delivery system into a sustainable system for future generations. But organic farming still has a long road to travel, with many formidable potential roadblocks to reaching widespread sectors of the system with true sustainability.

Chief among these challenges is maintaining organic integrity amidst the growing threat of genetic contamination from genetically altered seeds, primarily genetically engineered corn, soy, and canola. These include seeds patented to withstand heavy applications of herbicides, which has led some conventional farmers to use two to five times as much herbicide than before.

Other crops have been genetically engineered to express pesticides, such as the toxin Bt (Bacillus thuringiensis), in every cell of the plant requiring the plant itself to be listed with the EPA as a pesticide. The long-term effects of eating Bt foods is one concern, the threat to organic agriculture is another.

Used as a spray by organic farmers, naturally occurring Bt degrades easily in the soil. But with Bt corn, for example, the plant exudes the pesticide at full potency all the time. It doesn’t degrade. It’s known that insects develop resistance to the Bt toxin with overexposure and in time, will render Bt useless for organic farmers.

I believe that especially now, in the absence of mandatory labeling of genetically altered foods in the United States (unlike nearly every other industrialized nation), it’s more critical than ever before to protect the integrity of organic systems from such insufficiently tested technologies. For many reasons, certified organic food is considered by an increasing number of Americans to be a true port in a dangerous storm.

Nonetheless, national organic standards have a long road to travel, and several sectors need to be brought into the regulatory process (see right). Regulators need to know that consumers and the industry expect them to withstand any efforts to weaken the standards for motives based on profit over principle.

Having one set of very high national standards is coming at a most opportune time to maintain consumer confidence. There is an inherent power in the National Organic Standards to help build an organic and sustainable future.

To read any and all details about organic rules and regulations, visit www.ams.usda.gov/nop/, The National Organic Program, and check it from time to time for changes in regulations and labeling as they’re implemented.

Letters to the editor, October 2002

Protecting the Shipley Fields: great progress in a short time