This article was originally published in June 2001 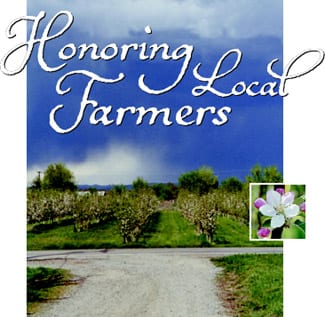 This month and throughout the summer, we are honoring the local farmers who bring bounty to our tables. A cherry is not a just a cherry, but one of Mark LaPierre’s well-nurtured organic Rainier cherries. A carrot is not a carrot, but one of Nash’s Best.

By being intentional about buying locally grown, organic produce, we play a vital instrument in the orchestra of each year’s harvest. Not only do we feed each other today, but we plant the seeds for the generations of tomorrow. To all the family farmers out there — a heartfelt thank you from your biggest fans! 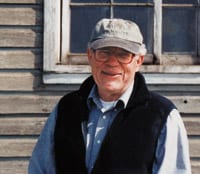 Nash Huber, of Dungeness Delta Farm. “Farmer of the best carrots in the world.”

Nash Huber does his best thinking on a bicycle. As such, he’s done a Tour de France worth of thinking about the future.

One can see the wheels turning in his mind as he stands in front of a wall of hay, surveying the 100 acres of the Delta Farm, the first farm purchased through the PCC Farmland Fund. Nash initially sounded the alarm about quickly disappearing farmland in the Dungeness Delta near Sequim and the PCC Farmland Fund was born.

Unless sources of land are secured, the future of his organic farming operation, and many like it, are at stake. “We have to be able to see past the next two or three years,” Nash says, ” We need to plan for the next generation. Now we have to focus on the land to preserve it for the young people.”

It is evident that he doesn’t take this responsibility lightly. Nash has a crew of dedicated young apprentices who have found a calling on the farm.

The next generation of farmers, Will Beery, Sam McCullough and Scott Chichester.

Most young Sequimites flee the small town directly after high school, but some have absorbed the pulse of the land and feel drawn to tending it. Josh Gloor has worked year round with Nash Huber for several years and is part of the next generation of young farmers.

Josh and his wife and two young children have just purchased the little green farmhouse next to Nash’s land. Scott Chichester has worked on the farm 4 or 5 years and is also attending Evergreen College to obtain a degree in Agronomy. In various ways, everyone who works on the farm says the same thing — they want to keep in touch with what sustains them. What is a more essential pursuit in life than securing a source of healthy food? 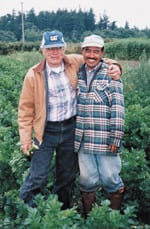 Nash grew up on a family farm in Illinois. At that time in agricultural history, farms were more diversified. Instead of growing one crop of soybeans or corn, farmers tended a more sustaining variety of dairy cows, chickens and row crops. Four years of college and a degree in chemistry later, Nash went to work in the chemical industry performing analytical analysis. He learned a lot in the industry, but was certain after a few years that he wanted to return to the land.

In 1968, he began farming in the Dungeness Delta. At first, his operation wasn’t organic; but gradually he adopted organic growing methods until, in 1979, his farm was certified organic, one of the first in Washington state.

After 33 years in the same area, the cycles of life become pretty apparent. In a slide show, Nash displays some pictures of kids on the farm who are now in their twenties with kids of their own. Certain families weave in and out of the clockwork of life on the farm.

As pictures of familiar faces come up, Nash shakes his head and says, “I don’t think I’d be here today if it wasn’t for this person,” or “I don’t think I’ve ever seen her come in to work without a smile on her face.” The relationship between thoughtful farmers and the land is a symbiotic one and so, too, are the relationships formed between the old and new generations of farmers.

If you’re ever out near Sequim, look for Nash and the next generation of farmers out cycling around the scenic Dungeness loop. No doubt, they’re thinking up a storm. 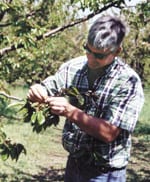 On a sunny spring afternoon walking through Mark LaPierre’s orchards, one gets the impression that he’s had the relief of a good night’s sleep after many sleepless nights. He is calm and soft-spoken as he moves his tall, slender frame noiselessly through the trees, as if not to interrupt Mother Nature at her work.

His Bing and Rainier cherry trees have just finished blossoming. Like a careful parent, he’s been up all night for weeks protecting the cherry blossoms from the dangers of a spring frost. Because cherry trees come into bloom about two weeks ahead of apples and pears, they are particularly susceptible to the fickle nature of April’s weather.

When the temperature drops, wind turbines circulate warm air through the orchards.

In the midst of such vulnerability, a serious battalion of defense methods and good neighbors come to Mark’s aid in thwarting a freezing wind that may come in the middle of any night. Smudge pots at the end of each row are lit when the temperature drops to freezing. Huge wind machines that tower above the trees circulate the warm air from the smudge pots through the orchards. Neighbors, his accountant, fellow farmers, even PCC’s produce merchandiser, Joe Hardiman, may show up to help late in the night.

Mark excitedly points out a new method they are trying called “the Wall of Mist”. Along the north side of the orchard where the coldest wind comes from, landscape timbers are erected every 10 feet to support a series of hoses. When the cold wind comes, the hoses are turned on, creating a wall of mist that shields the length of the orchard. The wind is warmed as it travels through the mist into the orchard.

This new technique is erected around the first Rainier cherry orchard that Mark planted in 1984, right out of WSU with a horticulture degree. It’s easy to detect a sentimental attachment towards this orchard of his youth

This first seven-acre plot was right next to the plot farmed by his grandfather, who grew grapes. Mark gradually bought neighboring plots and now has 50 acres of trees, including Rainier and Bing cherries, nectarines, and Gala, Fuji and Pink Lady apples. When asked about growing other types of crops, Mark says simply, “I like working with trees.” 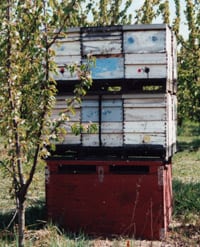 Bees are hard at work pollinating for a good crop.

As we meander among the trees, Mark subconsciously reaches for clusters of pink flowers wherever he stops and plucks off all but the central “king blossom.” This allows one larger fruit to grow on each cluster, as opposed to numerous, smaller fruit all crowded together. A large group of farmhands will move through all the orchards, performing this task by hand.

Mark reaches up for a branch and pulls it down, showing us the minuscule beginnings of each Rainier cherry nestled deep within each fading flower. In a short two-months time, these will be irresistibly sweet yellow cherries with the crimson blush that carry cherry-lovers beyond all reason in PCC’s produce department.

For now, they are cradled in the soft buzz of industrious bees that have moved on to do their work in the apple orchards. As we stand in the midst of the blooming Gala orchard across the road, I listen carefully. All I can hear is the lull of the bees and the sing-songy calling of robins as they hop in and out of their spring nests.

The sun is shining, but in the distance, steel blue clouds are piling up. The distant rumbling of an unusual spring thunder rolls through the silence. For such a moment of peace as this, one can easily see that, to Mark LaPierre, the lost sleep is well worth it.