This article was originally published in May 2001 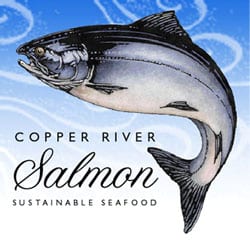 See also in this article:

The Copper River fishing season opens May 13, an occasion that brings out promotional banners on grocery stores everywhere. You’ll see shoppers lined up some places, eager to pay $20 or more for a pound of King Salmon from this mighty Alaskan river.

What’s the fuss about? Are these Copper River fish really better?

PCC Seafood and Meat Merchandiser Lee Pate says, “Copper River salmon must swim through some of the toughest currents and farther than any other salmon to get home for spawning. They have a higher oil content, being all fattened up for their swim.

“Salmon stop eating once they’re in the river,” Pate explains. “They need the fat reserves to get home. It’s this high fat and oil content that makes the Copper River salmon so flavorful.”

The Copper River Kings (running mid-May to mid-June) are the fattiest with the most beneficial Omega 3 fats. Copper River Sockeyes (May-July) are the reddest. The Copper River Coho, which start running in late-July and are strong through September, are relatively unexciting but available longer.

All Copper River wild salmon is sustainably harvested from an abundant, healthy, natural run. You are not buying an endangered species.

Pate is working hard to deliver a sustainable seafood program for PCC Natural Markets. Seventy percent of the world’s fisheries are depleted, yet the Northwest is fortunate. A number of regional fisheries, including the Alaskan waters, are sustainable. Our Dungeness crab, oysters and mussels, and the small Oregon Rock Shrimp also are considered sustainable.

Consumer demand for seafood — shrimp and prawn especially — is a challenging force as Pate works on a sustainable seafood program. The ready availability of seafood in the marketplace creates a false impression that all is well, while in truth some fish are doing better than others.

How does PCC satisfy customer demands while navigating a responsible way through the issues of sustainability and inevitably, fish farming versus wild-caught fish?

Consumer demand and education
The crux of it is that wild catches are being regulated, but consumer demand for all manner of seafood is not. Pate explains, “The current reality is that shoppers demand a constant supply of salmon and shrimp to buy anytime, regardless of season.

“In order always to have salmon, some of our stores have sold farmed Atlantic salmon, if there is no wild caught salmon available. At inexpensive prices, this farm-raised salmon is snapped up by shoppers.” It’s this same salmon that has prompted many members to write and ask, why does PCC sell farmed fish and shrimp at all?

Many consumers have believed that fish farming eases pressure on declining wild populations and makes up for the shortfall. It turns out that aquaculture usually does the opposite.

Educating consumers
The Audubon Society, Natural Resources Defense Council, and others say it’s possible to farm fish and do less damage with “closed systems” built inland. The waste from closed systems is easier to process and closed systems can better control pollution and escapes.

“Open systems” with ponds or nets containing the fish in wetlands or at river mouths are more problematic than “closed systems.” Some Atlantic salmon farmers in Maine use “open systems” and rotate their fish-raising pens to give these areas time to recover. This is proving effective in reducing disease and pollution, which led Audubon to give this Atlantic salmon a “green” rating on its “fish scale,” although other Atlantic salmon is in the “red” zone (see Audubon “fish scale”).

“The power of consumers to influence the buying decisions of seafood wholesalers and retailers has rarely been tried, but its effects have in some cases been dramatic,” writes Mercedes Lee in “Seafood Lover’s Almanac,” published by the National Audubon Society. “Consumer reaction to dolphin deaths in the major Pacific tuna fishery led to ‘dolphin safe’ labeling, complete restructuring of the tuna industry, and a huge reduction in dolphin deaths. A more recent ‘Give Swordfish a break’ campaign — run by SeaWeb and the Natural Resources Defense Council — raised visibility, affected prices, and gathered crucial momentum towards a recovery plan for depleted swordfish in the Atlantic.”

Not all fish are equal. Wild clams and scallops, for example, are dredged, which destroys sea bottom habitat and is very wasteful of by-catch. Snapper, Chilean Sea Bass, Grouper, Swordfish and Shark are all depleted. On the other hand, nearly all Trout and Catfish sold commercially are fresh-water farmed and earn a “green” rating for reasons related to being fresh water fish. Besides Rock Shrimp from Oregon, some prawn from Alaska and the Gulf of Mexico also are considered a good clean catch and sustainable.

Avoiding most shrimp is one of the first steps consumers can take for sustainable seafood. Shrimp and prawn are the driving force behind seafood counters across the United States, accounting for 31percent of seafood sales. Shrimp trawling is one of the most harmful fishing practices due to high by- catch, while shrimp aquaculture destroys coastal wetlands and mangrove forests.

The Certified Sustainable label would carry the blessings of environmental marine experts such as Carl Safina from the National Audubon Society, Rebecca Goldberg from Environmental Defense, and others from the World Wildlife Fund and the Monterey Bay and New England Aquariums. They’re on the Seafood Advisory Council for Ecofish, a distributor working with The Marine Stewardship Council (MSC) — an international, non-governmental body that’s developing a third party, independent standard for marine sustainability. Fish from certified sustainable fisheries will carry a certifying label or seal. Typically, fish sold under the certified sustainable label would be sold frozen, not fresh, but that could be an advantage. At-sea freezing can deliver fresher taste to the consumer and ease concerns about spoilage.

The Certified Sustainable label also applies to farmed fish if raised in a way that’s friendly to the surrounding environment. Already, there’s certified sustainable Rainbow Trout from Nebraska and Blue Mussels from Canada, which are rope cultured with local seed stock.

A certifying authority with sustainable standards may help consumers and retailers make seafood choices that are environmentally sound. When consumers buy seafood from an ecologically sound fishery, it reduces pressure on depleted and threatened species. Pate hopes a Certified Sustainable label will modify consumer demand for unsound choices. What we can do as consumers is review any unsound habits and let our seafood managers know we appreciate the deep waters they navigate. For more information:

Audubon Society’s “fish scale” is meant to inform consumers and enable them to make choices toward more abundant, better-managed species.

Fair trade tea and coffee: changing the world one cup at a time