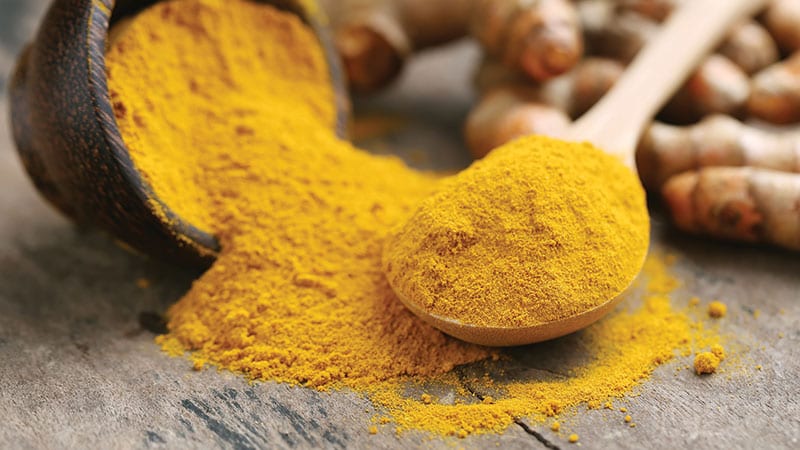 Turmeric, the fragrant, yellow spice that lends its distinct golden color to curries and rice dishes, has been hailed as a superstar cure-all in the U.S. natural medicine community in recent years. Antioxidant, anti-inflammatory, and anti-cancer properties are only the beginning of the claims surrounding this spice’s proposed superpowers, extending on to Alzheimer’s disease, diabetes, heart disease, arthritis, inflammatory bowel syndrome (IBS), acne and even depression. Curcumin, one of the compounds naturally found in turmeric and sometimes isolated as its own supplement, is thought to be the key component responsible for these potent protective effects, although this is still being explored.

The Western world has come late to appreciating turmeric’s potential: The rhizome, a member of the ginger family, has traditionally been used “in Ayurveda and other traditional Indian medical systems, as well as Eastern Asian medical systems such as traditional Chinese medicine,” according to the National Institutes of Health’s National Center for Complementary and Integrative Health. “In India, it was traditionally used for disorders of the skin, upper respiratory tract, joints and digestive system.”

Turmeric contains over 100 different components, but its biological actions in the body are mainly attributed to curcumin, a polyphenol that makes up about 3% of the rhizome (the root) by weight. Polyphenols are simply a category of plant-based micronutrients with antioxidant properties that offer a variety of protective actions in the body. Many supplements consist of curcumin that has been extracted from the root. Researchers are attempting to quantify turmeric’s effects on the body and determine whether its reputed benefits can be backed by evidence. They have reached few definitive conclusions, examining the effects of consuming both turmeric and isolated curcumin, but the results are generally promising.

In particular, reputable studies have reported anti-inflammatory effects and cardiac benefits from turmeric, which explains why turmeric shows potential in managing diseases that are triggered or prolonged through inflammation, such as arthritis and colitis.

Turmeric’s ability to fight inflammation, among other protective actions, depends on whether the body absorbs enough of its bioactive components (those that have a beneficial effect), including curcumin and volatile oil. Taking curcumin extracts may sound like a shortcut to providing the body with these bioactive components, but studies have shown that consuming plain turmeric provides more substantial protective effects than taking curcumin alone. This phenomenon is likely due to synergistic effects between the various components of turmeric, which includes the volatile oil and many other plant compounds and micronutrients besides curcumin.

Unfortunately, curcumin is not very bioavailable, meaning that when you eat it, only a small amount is absorbed into your tissues. This is true whether the curcumin is consumed in turmeric or in isolated form, due to its low solubility and tendency to be quickly metabolized in the liver and small intestine. Luckily, turmeric can be combined with other foods, like black pepper and fats like coconut or olive oil, allowing the curcumin to be more readily absorbed.

Most research studies involved participants consuming a great deal more turmeric and curcumin than the typical Western diet contains. Supplements, and in particular, a form called turmeric extract, can help you reach an intake of 500-2,000 milligrams of curcuminoids a day. This is the dosage range used in most clinical trials and, in supplement form, may be more palatable than eating turmeric by the spoonful. Turmeric extract contains a much higher concentration of curcuminoids than the common kitchen spice, up to 95%! Meanwhile, the turmeric in your spice drawer and the turmeric powder in many nutritional supplements can contain as low as 3% curcuminoids, so research the supplements you plan to buy, check labels and ask questions when warranted. Always check with your primary care physician or a registered dietician before starting a new supplement regimen, especially if you’re dealing with any chronic diseases.

Specifically, high doses of turmeric are not recommended for certain populations. For example, individuals with a history of or at risk for kidney stones should use caution because turmeric contains a lot of water-soluble oxalates. Also, large amounts can inhibit iron absorption, a concern for those who are iron-deficient. High doses of curcumin have been shown to promote bile secretion by triggering gallbladder contractions, so people with gallstones or related issues should limit turmeric consumption to normal cooking quantities. Additionally, curcumin can lower blood glucose levels and slow blood clotting. Individuals with diabetes and people on any sort of blood thinning medication or who are preparing for surgery should therefore practice caution in supplementing with turmeric. Finally, pregnant or breast-feeding individuals should abstain from high doses of turmeric because research has not yet proven medicinal quantities to be safe for them.

This might sound like one too many reasons to stay away from turmeric. However, if you look at the evidence, almost every medication and supplement comes with a variety of such warnings depending on how the substance interacts with various organs and conditions. Overall, turmeric is an excellent natural option for fighting inflammation and potentially a multitude of other issues. Just stay on the cautious side if you fall into any of the above-mentioned populations. And note that these cautions don’t apply to the quantities of turmeric typically consumed in foods.

In summary, if you’re looking for medicinal benefits from a nontoxic, nonpharmaceutical source, give turmeric supplementation a try. Aim for consuming 500-2,000 milligrams daily of curcuminoids through turmeric extract. (In one study reviewing the results of six separate human trials that showed anti-inflammatory effects, all studying turmeric, curcumin doses up to 8,000 milligrams a day were shown to be safe and nontoxic.) And it’s not a bad idea for all of us to eat more turmeric as part of a balanced diet, with the bonus that it is a versatile, tempting addition to many recipes. Rather than sprinkling a little on every meal (you’ll end up with some strange flavor combinations), simply incorporate more dishes that highlight turmeric. Try whipping up a yellow Thai curry over rice or a mint and turmeric chutney! And no matter what, practice living a balanced lifestyle and eating a wide variety of fresh, whole foods and spices, which all work together to fend off disease and keep you healthy.

Look for regular Sound Consumer articles over the next year from Delaney Sump, a student in the Master of Science in Nutrition/Didactic Program in Dietetics program at Bastyr University, working with Maribeth Evezich, MS, RDN, CD an assistant professor in the Department of Nutrition and Exercise Science.

A pioneer in natural medicine, Bastyr University is a nonprofit, private university that is at the forefront of developing leaders in natural health arts and sciences for the 21st century. Bastyr offers graduate and undergraduate degrees in science-based natural medicine that integrates mind, body, spirit and nature. The University is also a leader in conducting cutting-edge research in complementary and alternative medicine and in offering affordable natural healthcare services in its local communities.

Interested in cooking with turmeric? Try these PCC recipes: