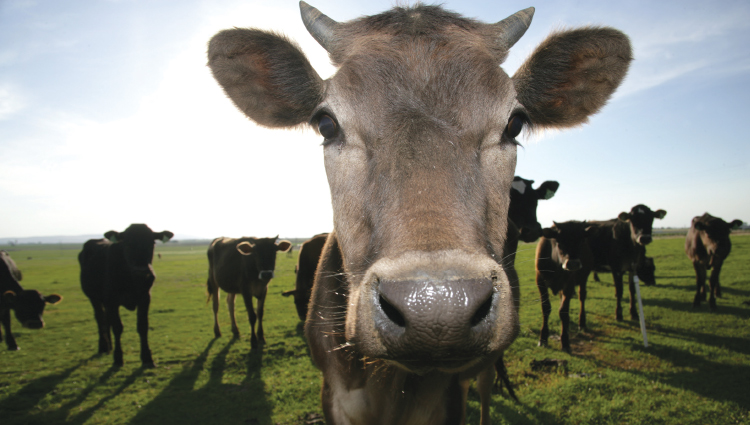 At PCC Natural Markets, we have the pleasure of partnering with many leaders in the organic and good food movement — from farmers and fishers to cheesemakers and winemakers — all working to transform our food system for the better. But every now and then a PCC partner goes so above and beyond to meet the highest standards that their efforts deserve special recognition.

That’s how we feel about Pure Éire Dairy in Othello, Wash. In addition to being certified organic and Non-GMO Project Verified, it recently was the first dairy farm in all North America to be both Certified Animal Welfare Approved (AWA) and Certified Grassfed by A Greener World (AGW), an optional addition to AWA standards. If farmers were Hollywood stars, this is like winning an Oscar and an Emmy — an exceptional achievement.

Nestled in the heart of the Columbia Basin, Pure Éire Dairy is the realization of Richard and Jill Smith’s dream to create a product they’d be proud to stand behind.

Both have farming in their blood. Jill’s parents grew “everything from corn to hay to peas” in Othello. Richard’s parents emigrated from Ireland to Florida and ran dairies, a tradition he has carried forward. The name Pure Éire is a nod to Richard’s Irish heritage.

Although the couple produced organic milk for a number of years for a large cooperative, they had long wanted to produce and bottle their own from grassfed cows raised on pasture. In the spring of 2009, they started Pure Éire Dairy, at first grazing just seven Jersey cows. Today, as demand has grown, they graze 175 Jerseys on 300 acres of lush pasture. “We didn’t reinvent the wheel,” says Jill. “We just wanted to produce milk the old-fashioned way.”

They haven’t looked back. “We’ve never strayed from our mission of being 100-percent grassfed,” says Jill. “It has been our guiding principle since day one.” The couple welcomes visitors to the farm so people can see for themselves what the cows eat and how they’re treated.

Why the certifications matter

“Organic certification doesn’t mean cows are 10-percent grassfed,” Richard says. “We wanted to be transparent about how the cows were being handled.” One way the Smiths communicate their farming practices — and ensure transparency — is through their AWA and Certified Grassfed by AGW certifications.

AWA certification is a big deal. AWA requires audited, high animal welfare practices for the entire life of the animals, from birth through slaughter. AWA certifies only independent family farms and is free to farmers, offering support along the way. As with organic certification, no growth hormones or subtherapeutic antibiotics are permitted by AWA.

Pure Éire’s Jill Smith says, “We don’t have a big publicity machine, so we rely on AWA to shine a light on us to distinguish us from the rest of the dairy industry. AWA sets the gold standard.”

Animal Welfare Approved offers the only certification that guarantees foods come from animals fed a 100-percent grass and forage diet, raised outdoors on pasture for their entire lives.

Certified Grassfed by AGW is an optional, additional accreditation for farmers meeting AWA’s animal welfare standards. AGW offers the only certification and logo in the U.S. and Canada that guarantees foods come from animals fed a 100-percent grass and forage diet, raised outdoors on pasture or range for their entire lives, and managed according to Certified AWA’s top-notch welfare and environmental standards on an independent family farm.

certification. “Families want dairy products from happy cows on pasture, but with so many misleading labels it can be difficult to purchase with confidence.”

For Pure Éire’s Richard Smith, the decision to pursue grassfed certification was easy. “We wanted a food label that would reflect our commitment to the health of our animals and set us apart in the grassfed market. Certified Grassfed by AGW shows that we are doing exactly what we say we’re doing, according to the highest standards.”

One practice that sets Pure Éire Dairy apart from other producers is a practice that is unheard of in the dairy industry. “We leave calves with their mothers,” says Richard, “milking only once a day, until they are several months of age. Most dairies — conventional or otherwise — will take calves early and milk multiple times.”

This choice to focus on quality and welfare, rather than quantity, may result in less overall milk production, but it has led to many loyal customers: “Every visitor who comes to the farm leaves thanking us for keeping calves on their mothers,” says Richard.

The Smiths also go above and beyond by ensuring their cows produce the A2 type of beta casein. All cow’s milk contains casein, but the percentage of A1 and A2 beta casein protein varies between herds of cattle and also between countries and provinces. Pure Éire is PCC’s only vendor breeding and testing for A2 content.

“We have bred only for A2 throughout the life of the dairy,” says Jill. “We had to test hundreds of cows in building our herd because the A2 DNA has basically been bred out of cows. That’s why our testing and breeding program has been so important. A full Jersey dairy might actually have more A1 than A2 unless they’ve done the same work.”

There’s speculation that people with symptoms of lactose intolerance could be unable to digest A1 protein and that A1 milk may be linked to some health problems. Jill grew up lactose intolerant herself and says the milk she produces is the only dairy she ever has been able to tolerate.

A new era for dairy?

Is Pure Éire setting an example that other dairies are following? “Yes!” says AGW’s Emily Moose. “There already are a number of Certified Grassfed by AGW sheep and goat dairies,” and Moose expects more cow dairies will apply for certification soon.

“Trailblazers like Pure Éire Dairy are carving out a valuable market niche and their innovation is opening up opportunities for other farmers and ranchers across the continent,” Moose says. “We’re already experiencing unprecedented demand for our grassfed certification as consumer demand and interest in 100-percent grassfed foods increases.”

When Pure Éire was working on perfecting its yogurt, PCC staff organized a tasting with farmer Jill Smith. Several PCC yogurt-lovers huddled in our kitchen one morning and compared a variety of organic yogurts, noting taste, texture and mouthfeel. Jill took our feedback home to Othello and tweaked Pure Éire’s yogurt to match the traits our tasters liked best. The result is the ultra-thick, creamy, rich yogurt you’ll find in PCC stores now!

Jersey cattle like Pure Éire’s are one of the world’s oldest breeds and produce milk that only can be described as decadent. Dairy from grassfed cows is high in nutrients, including conjugated linoleic acid (CLA), a beneficial fatty acid shown to have cancer-fighting properties and immune system support and benefits for heart health and reducing inflammation. Milk from grassfed cattle contains as much as five times more beneficial CLA than milk from grain-fed cows.

Pure Éire’s organic milk is vat-pasteurized and non-homogenized, which helps retain creaminess and nutrient-rich fats in their natural form. It has cream on top, so shake before every use.

Learn about the jump in "grassfed" products, Washington's initiative to cap and reduce carbon pollution, what spurred the creation of the first marine monument in the Atlantic Ocean, and why prices for B.C. salmon have spiked.

Does the proposed TPP trade agreement threaten our food?

Food, and trade deals involving food, are a topic in the presidential race with some provisions in the proposed Trans-Pacific Partnership (TPP) raising concern among good food advocates. Here's why.

Look for new-crop organic Satsuma mandarins, Texas Rio grapefruit, Comice pears, and oranges — both Navel and the glorious Cara Cara varieties. Our staff are loving a pumpkin face mask and a variety of stress relief products, fudgy "raw" chocolate, a seasonal tea sampler, and a fabulous locally made black-eyed pea hummus. Pick these favorites up next time you shop at PCC!